A coherent pathway which starts from no more than rocks, water and carbon dioxide and leads to the emergence of the strange bioenergetic properties of living cells has been traced for the first time in a major hypothesis paper in Cell this week.

At the origin of life the first protocells must have needed a vast amount of energy to drive their metabolism and replication, as enzymes that catalyse very specific reactions were yet to evolve. Most energy flux must have simply dissipated without use. So where did all that energy come from on the early Earth, and how did it get focused into driving the organic chemistry required for life? 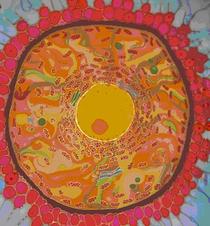 The answer lies in the chemistry of deep-sea hydrothermal vents. In their paper Nick Lane (UCL, Genetics, Evolution and Environment) and Bill Martin (University of Dusseldorf) address the question of where all this energy came from – and why all life as we know it conserves energy in the peculiar form of ion gradients across membranes.

“Life is, in effect, a side-reaction of an energy-harnessing reaction. Living organisms require vast amounts of energy to go on living,” said Nick Lane.

Humans consume more than a kilogram (more than 700 litres) of oxygen every day, exhaling it as carbon dioxide. The simplest cells, growing from the reaction of hydrogen with carbon dioxide, produce about 40 times as much waste product from their respiration as organic carbon (by mass).

In all these cases, the energy derived from respiration is stored in the form of ion gradients over membranes.

This strange trait is as universal to life as the genetic code itself. Lane and Martin show that bacteria capable of growing on no more than hydrogen and carbon dioxide are remarkably similar in the details of their carbon and energy metabolism to the far-from-equilibrium chemistry occurring in a particular type of deep-sea hydrothermal vent, known as alkaline hydrothermal vents. Based on measured values, they calculate that natural proton gradients, acting across thin semi-conducting iron-sulphur mineral walls, could have driven the assimilation of organic carbon, giving rise to protocells within the microporous labyrinth of these vents.

They go on to demonstrate that such protocells are limited by their own permeability, which ultimately forced them to transduce natural proton gradients into biochemical sodium gradients, at no net energetic cost, using a simple Na+/H+ transporter. Their hypothesis predicts a core set of proteins required for early energy conservation, and explains the puzzling promiscuity of respiratory proteins for both protons and sodium ions.

These considerations could also explain the deep divergence between bacteria and archaea (single celled microorganisms) .

For the first time, says Lane, “It is possible to trace a coherent pathway leading from no more than rocks, water and carbon dioxide to the strange bioenergetic properties of all cells living today.”

1 thought on “Origin of life emerged from cell membrane bioenergetics”