As part of their ongoing research on the physiologic factors that contribute to the development of obesity, Joslin Diabetes Center scientists have identified a cell cycle transcriptional co-regulator – TRIP-Br2 – that plays a major role in energy metabolism and fat storage. This finding has the potential to lead to new treatments for obesity.

The study is being published today ahead of print by Nature Medicine. Transcriptional co-regulators manage the expression of DNA, either by activating or suppressing the expression of genes. TRIP-Br2 regulates metabolic genes involved in fat storage and energy metabolism. Joslin scientists are actively involved in studying the regulation of the many factors that control the storage, mobilization and utilization of excess energy in adipocytes (fat cells). 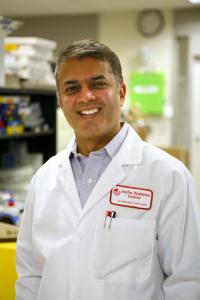 The scientists looked at TRIP-Br2 levels in mice fed a low-fat diet and a high-fat diet as well as obese mice: the mice on the high-fat diet and the obese mice had higher levels of TRIP-Br2 in their fat tissue. They also found that TRIP-Br2 is significantly elevated in the visceral fat (the fat that accumulates around the middle of the body which has more harmful effects than fat in other areas of the body) of obese people, especially those who store fat mostly in that area.

When TRIP-Br2 is suppressed, the expression of hormone sensitive lipase (HSL) and Beta3-adrenergic (Adrb3) receptors, which are involved in fat breakdown (lipolysis), is significantly enhanced in fat tissue. When TRIP-Br2 is elevated by obesity and a high-fat diet, it suppresses HSL and Adrb3 receptors resulting in a decrease in energy expenditure and an increase in fat accumulation.

“TRIP-Br2 is important for the accumulation of fat,” says lead author Rohit N. Kulkarni, M.D., Ph.D., Principal Investigator in the Section on Islet Cell and Regenerative Biology and Associate Professor of Medicine at Harvard Medical School. “When an animal lacks TRIP-Br2, it can’t accumulate fat.”

TRIP-Br2 modulates fat storage by simultaneously regulating lipolysis, energy output and oxidative metabolism — which work together as complementary processes. “This is the first study to identify a cell cycle transcriptional co-regulator that controls these processes. TRIP-Br2 appears to have a different mechanism of action than transcriptional co-regulators reported in previous studies,” says Dr. Kulkarni.

TRIP-Br2 is a potential therapeutic target to treat obesity and its related complications, including insulin resistance. The Joslin scientists are currently investigating ways to “reduce TRIP-Br2 in visceral fat, which would allow enhanced expression of HSL and Adrb3 receptors. The ability to modify these two molecules offers a new pathway for combating obesity,” says Dr. Kulkarni.

Dr. Kulkarni and his colleagues are also investigating whether the suppression of TRIP-Br2 and the resulting resistance to obesity have an impact on the development of cardiovascular disease and metabolic complications.