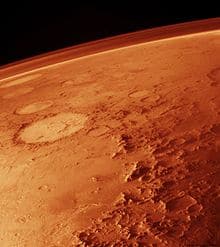 Writing in the journal Nature Geoscience, astrobiologists Alberto Fairén of Cornell University and Dirk Schulze-Makuch of Washington State University say the NASA Office of Planetary Protection’s “detailed and expensive” efforts to keep Earth microorganisms off Mars are making missions to search for life on the red planet “unviable.”

The researchers claim “the protocols and policies of Planetary Protection are unnecessarily restricting Mars exploration and need to be revised.”

The Office of Planetary Protection is like an interplanetary Environmental Protection Agency, with a mission “to minimize the biological contamination that may result from exploring the solar system.”

As far as Mars is concerned, say Fairén and Schulze-Makuch, such efforts are probably in vain, as “Earth life has most likely already been transferred to Mars.” Meteorite impacts have had 3.8 billion years to spread Earth life forms to Mars, as could several spacecraft that visited the planet without undergoing sterilization procedures now in place.

If organisms transferred to Mars over the eons failed to survive, modern organisms would likely face the same fate. On the other hand, if they did survive, say Fairén and Schulze-Makuch, “it is too late to protect Mars from terrestrial life, and we can safely relax the planetary protection policies.”

The researchers say spacecraft looking for life on Mars should still be cleaned to some extent to avoid confusing possible Martian organisms with organisms brought from Earth. But sterilization for other missions, like orbiters and geology-oriented explorers, could be scaled back.