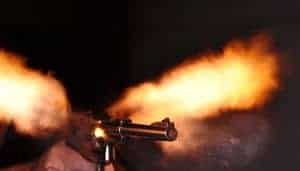 They’re young. They’ve been injured in an assault – so badly they went to the emergency room. And nearly one in four of them has a gun, probably an illegal one. What happens next?

A new study by the University of Michigan Injury Center provides data that could be important to breaking the cycle of gun violence that kills more teens and young adults than anything except auto accidents.

In the new issue of the journal Pediatrics, the team from the U-M Injury Center reports data from interviews with 689 teens and young adults who came to an emergency department in Flint, Mich. for treatment of injuries from an assault.

In all, 23 percent of the patients reported they owned or carried a gun in the last six months – and more than 80 percent of those guns were obtained illegally. Of those with guns, 22 percent said it was a highly lethal automatic or semiautomatic weapon. The study excluded guns used for recreational hunting and target practice.

Those with guns were also more likely that those without guns at their disposal to have been in a serious fight in recent months, to use illegal drugs or misuse prescription drugs, and to express approval for retaliation after an injury.

“This study zeroes in on a high-risk population of assault injured youth that has not been studied in this way previously,” says lead-author Patrick Carter, M.D., a clinical lecturer and injury research fellow in the Department of Emergency Medicine at the U-M Medical School and substance abuse section of the Department of Psychiatry. “The high rates of substance use, fighting and attitudes favoring retaliation, combined with the fact that so many of these youth had firearms, increases their risk for future firearm violence, as well as injury or death. But, our findings also provide an opportunity for public health interventions that could decrease their future firearm violence risk.”

Though the study did not evaluate the possible use of the emergency visit as a “teachable moment” to help at-risk youth understand the potential consequences of gun violence, such approaches have been tried successfully for other situations including substance use and youth violence. The study may lead to tests of a new approach for helping teens and young adults avoid future firearm-related violence.

The data for the new paper were gathered as part of a National Institutes of Health-funded project that is headed by Rebecca Cunningham, M.D., the director of the U-M Injury Center and an associate professor of emergency medicine.

Cunningham, who is the senior author of the new paper, also holds an appointment at the U-M School of Public Health and is the associate director of the Flint Youth Violence Prevention Center, which works with local community leaders to reduce violence through several on-going community-based programs.

The study has collected interviews with hundreds of teens and young adults who were treated at the Hurley Medical Center Emergency Department in Flint, a busy urban trauma center where U-M emergency physicians and residents are part of the care team.

Flint has the highest rate of violent crime of any American city over 100,000 people, according to the Federal Bureau of Investigation — including 1,930 reported aggravated assaults in 2012.

But Carter notes that the risk factors seen among Hurley emergency patients are probably not unique to Flint, and are likely representative of other cities with high rates of firearm violence. He hopes that other researchers will examine similar high-risk populations in other cities to confirm the study’s findings.

Carter notes that previous studies have documented gun ownership or access among ED patients, but that they have not specifically examined young people injured by assault, who are known to be at higher risk for negative health outcomes. Other school based studies of gun possession leave out those youth who are no longer in school or who aren’t attending school.

That’s what makes the new study so crucial to the eventual development of emergency department-based interventions, he notes.

For instance, more than a third of the young patients in the study who had guns said they used it for protection – but they were also more likely than those who did not have guns to have been involved a violent firearm incident with a peer or dating partner in recent months. More than half the patients interviewed said they would have little or no trouble getting access to a gun if they wanted one.

“Youth seeking care for assault provide a window of access to a high-risk population that have firearms and are at risk for future violence and injury” he explains. “The question is, how can we best incorporate firearm safety interventions into their emergency department visit to decrease that future risk? This study provides an initial step towards understanding the modifiable risk factors for firearm violence in this population, but more data and study is needed to effectively address the public health issue of firearm violence.”