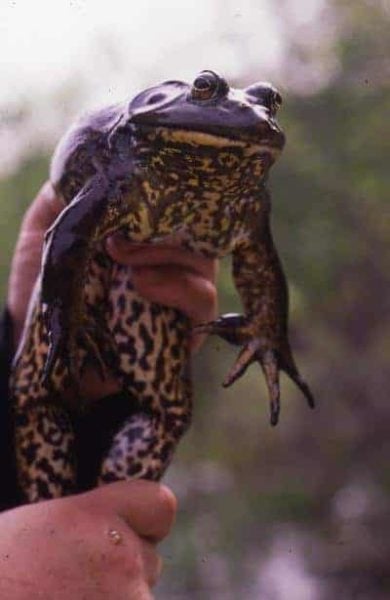 Pesticides commonly used in California’s Central Valley, one of the world’s most productive agricultural regions, have been found in remote frog species miles from farmland.

Writing in Environmental Toxicology and Chemistry, researchers demonstrate the contamination of Pacific Tree Fogs in remote mountain areas, including national parks; supporting past research on the potential transport of pesticides by the elements.

California’s Central Valley is one of the most intensely farmed regions in North America, producing 8% of U.S agricultural output by value. While the use of pesticides such as triazines, endosulfan and organophosphates is common across the U.S., California uses more pesticides than any other state.

“Our results show that current-use pesticides, particularly fungicides, are accumulating in the bodies of Pacific chorus frogs in the Sierra Nevada,” said Kelly Smalling a research hydrologist from the U.S. Geological Survey. “This is the first time we’ve detected many of these compounds, including fungicides, in these remote locations.”

The Pacific chorus frog Pseudacris Regilla can be found in abundance across the state’s Sierra Nevada mountain range. As with other amphibians, agrochemicals potentially pose a threat to chorus frogs, as exposure to pesticides can decrease their immune system, thereby increasing the risk of disease.

The team collected frogs, as well as water and sediment samples, from seven ponds ranging from Lassen Volcanic National Park at the northern most point of Central Valley, to the Giant Sequoia National Monument in the valley’s southern extent. All sites were downwind of agricultural areas.

“The samples were tested for 98 types of pesticides, traces of which were found in frog tissues from all sites,” said Smalling. “We found that even frogs living in the most remote mountain locations were contaminated by agricultural pesticides, transported long distances in dust and by rain.”

Two fungicides, commonly used in agriculture, pyraclostrobin and tebuconazole, and one herbicide, simazine, were the most frequently detected compounds, and this is the first time these compounds have ever been reported in wild frog tissue. Another commonly detected pesticide was DDE (Dichlorodiphenyldichloroethylene) a breakdown product of DDT which was banned in the United States in 1972. The continued presence of a DDT byproduct reveals how long this banned chemical can impact biodiversity.

A comparison of the frog tissue with water and sediment collected from the same sites shows that the frogs were the more reliable indicator of chemical exposure. This is partly due to the physical-chemical properties of the l compounds and biological influences such as such as organism specific metabolism and life history. Documenting the occurrence of these compounds is an important first step in figuring out the health consequence associated with the exposures.

“Very few studies have considered the environmental occurrence of pesticides, particularly fungicides which can be transported beyond farmland,” concluded Smalling. “Our evidence raises new challenges for resource managers; demonstrating the need to keep track of continual changes in pesticides use and to determine potential routes of exposure in the wild.”