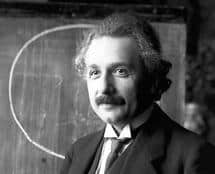 Albert Einstein’s assertion that there’s an ultimate speed limit – the speed of light – has withstood countless tests over the past 100 years, but that didn’t stop University of California, Berkeley, postdoc Michael Hohensee and graduate student Nathan Leefer from checking whether some particles break this law.

The team’s first attempt to test this fundamental tenet of the special theory of relativity demonstrated once again that Einstein was right, but Leefer and Hohensee are improving the experiment to push the theory’s limits even farther – and perhaps turn up a discrepancy that could help physicists fix holes in today’s main theories of the universe.

“As a physicist, I want to know how the world works, and right now our best models of how the world works – the Standard Model of particle physics and Einstein’s theory of general relativity – don’t fit together at high energies,” said Hohensee of the Department of Physics. “By finding points of breakage in the models, we can start to improve these theories.”

Hohensee, Leefer and Dmitry Budker, a UC Berkeley professor of physics, conducted the test using a new technique involving two isotopes of the element dysprosium. By measuring the energy required to change the velocity of electrons as they jumped from one atomic orbital to another while Earth rotated over a 12-hour period, they determined that the maximum speed of an electron – in theory, the speed of light, about 300 million meters per second – is the same in all directions to within 17 nanometers per second. Their measurements were 10 times more precise than previous attempts to measure the maximum speed of electrons.

Using the two isotopes of dysprosium as “clocks,” they also showed that as the Earth moved closer to or farther from the sun over the course of two years, the relative frequency of these “clocks” remained constant, as Einstein predicted in his general theory of relativity. Their limits on anomalies in the physics of electrons that produce deviations from Einstein’s gravitational redshift are 160 times better than previous experimental limits.

The UC Berkeley physicists and colleagues at the University of New South Wales in Sydney, Australia, who provided crucial theoretical calculations, published their results this week in the journal Physical Review Letters.

Hohensee noted that similar tests of Einstein’s theories can be conducted in huge accelerators like the Large Hadron Collider (LHC) in Switzerland, but such experiments are expensive, the colliders take a long time to build and still don’t reach energies high enough to where the theories could break down.

“You can try to probe these theories using big accelerators, but you would need to produce electrons with seven times the energy of the protons at the LHC. Or you can look at high energy phenomena in distant stars or black holes, but those are not in the lab and not fully understood,” he said. “Instead, We can look for evidence that the standard model or general relativity break at low energy scales in small ways in a tabletop experiment.”

Compared with existing tests, the revamped experiment by UC Berkeley physicists will potentially be a thousand times more sensitive, the level at which some theorists predict special relativity might break down.

“This technique will open the door to studying a whole other set of parameters that could be even more interesting and important,” said Budker, who was among the first to use dysprosium’s unusual electronic structure to test fundamental aspects of particle physics.

Budker and his team also report in a newly accepted paper in Physical Review Letters that they used the same experimental apparatus to show that a fundamental constant of nature, the fine structure constant, does not vary over time or in different gravitational fields.

Hohensee is part of a group led by UC Berkeley physics professor Holger Müller that focuses on precision measurements to test aspects of Einstein’s theories, including gravitational redshift. The new results complement findings from one of Müller’s 2010 experiments, which put the tightest limits yet on the gravitational redshift for matter waves.

“This experiment introduces a new technology using dysprosium to the field of testing Einstein. That is the major new trick. That makes it especially interesting to me,” Müller said.