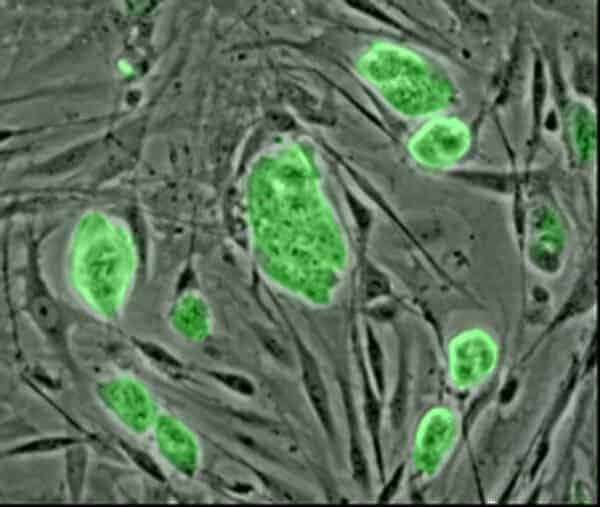 Could harvesting stem cells for therapy one day be as simple as asking patients for a urine sample? Researchers at Wake Forest Baptist Medical Center’s Institute for Regenerative Medicine and colleagues have identified stem cells in urine that can be directed to become multiple cell types.

“These cells can be obtained through a simple, non-invasive low-cost approach that avoids surgical procedures,” said Yuanyuan Zhang, M.D., Ph.D., assistant professor of regenerative medicine and senior researcher on the project.

Reporting online in the journal Stem Cells, the team successfully directed stem cells from urine to become bladder-type cells, such as smooth muscle and urothelial, the cells that line the bladder. But the urine-derived cells could also form bone, cartilage, fat, skeletal muscle, nerve, and endothelial cells, which line blood vessels. The multipotency of the cells suggests their use in a variety of therapies.

“These stem cells represent virtually a limitless supply of autologous cells for treating not only urology-related conditions such as kidney disease, urinary incontinence and erectile dysfunction, but could be used in other fields as well,” said Zhang. “They could also potentially be used to engineer replacement bladders, urine tubes and other urologic organs.”

Being able to use a patient’s own stem cells for therapy is considered advantageous because they do not induce immune responses or rejection. However, because tissue-specific cells are a very small subpopulation of cells, they can be difficult to isolate from organs and tissues.

Zhang’s team first identified the cells, which are a small subset of the many cells found in urine, in 2006. The current research builds on earlier studies by confirming the multipotency of the cells. In addition, the research found that unlike iPS cells or embryonic stem cells, the urine derived-stem cells do not form tumors when implanted in the body, indicating they may be safe for use in patients.

The research involved obtaining urine samples from 17 healthy individuals ranging in age from five to 75 years. Isolating the cells from urine involves minimal processing, according to the authors. Next, they evaluated the cells’ ability to become multiple cell types.

Next, the researchers placed cells that had been differentiated into smooth muscle and urothelial cells onto scaffolds made of pig intestine. When implanted in mice for one month, the cells formed multi-layer, tissue-like structures.

Where do the cells come from? Researchers suspect that the cells originate from the upper urinary tract, including the kidney. Female study participants who had received kidney transplants from male donors were found to have the y chromosome in their urine-derived stem cells, suggesting the kidney as the source of the cells.

“Identifying the origins of the cells will lead to a better understanding of the biology of this multipotent population of mesenchymal cells within the urinary tract system,” said Zhang.