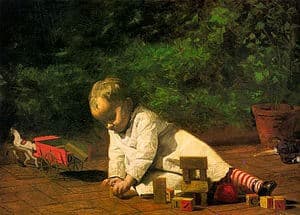 Aggression in school-age children may have its origins in children 3 years old and younger who witnessed violence between their mothers and partners, according to a new Case Western Reserve University study.

“People may think children that young are passive and unaware, but they pay attention to what’s happening around them,” said Megan Holmes, assistant professor of social work at the Jack, Joseph and Morton Mandel School of Applied Social Sciences at Case Western Reserve in Cleveland.

Between three and 10 million children witness some form of domestic violence each year, according the National Center for Children Exposed to Violence.

Holmes said researchers know the impact of recent exposure to violence, but little information has been available about the long-term effect from the early years of life. To her knowledge, she said her study is the first to look at the effect of early exposure to domestic violence and its impact on the development of social behavior.

In the study, “The sleeper effect of intimate partner violence (IPV) exposure: long-term consequences on young children’s aggressive behavior,” Holmes analyzed the behavior of 107 children exposed to IPV in their first three years but never again after age 3. The outcomes of those children were compared to 339 children who were never exposed.

Those studied were from the National Survey of Child and Adolescent Well-Being (NSCAW), which included children reported to Child Protective Services for abuse or neglect. The children’s behavior was followed four times over the course of 5 years.

Holmes’s research examined the timing, duration and nature of their exposure to violence and how it affected aggressive behavior.

Analyzing aggressive behaviors, Holmes saw no behavioral differences between those who did or did not witness violence between the ages of 3 and 5, but children exposed to violence increased their aggression when they reached school age. And the more frequently IPV was witnessed, the more aggressive the behaviors became.
Meanwhile, children never exposed to IPV gradually decreased in aggression.

Knowing about the delayed effect on children is important for social workers assessing the impact on children in homes with domestic violence, Holmes said.

“The delay also gives social workers a window of opportunity between ages 3 and 5 to help the children socialize and learn what is appropriate behavior,” said Holmes, who has worked with mothers and children in domestic violence shelters.

Interventions can include play and art therapies to help children work through the violence they were exposed to.

Holmes reported her findings in the spring issue of Journal of Child Psychology and Psychiatry.

“My overarching goal is to contribute to optimal development of children who have been exposed to IPV by identifying risk and protective factors that will be translated into interventions,” Holmes said.

The study included support from the National Quality Improvement Center on Early Childhood, which is funded by the U.S. Department of Health and Human Services’ Administration for Children, Youth and Families in the Office on Child Abuse and Neglect.