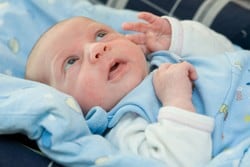 Children who came into the world by Caesarean section are more often affected by allergies than those born in the natural way. The reason for this may be that they have a less diverse gut microbiota, according to a study by universities in Sweden and Scotland.

The researchers have followed gut macrobiota development in 24 children up to the age of two in the Swedish provinces of Östergötland and Småland, nine delivered through Caesarean and 15 delivered naturally, through vaginal birth. They used a type of molecular biology analysis, which gives a broad overview of the varieties of bacteria present in the intestines.

The results are presented in the scientific journal Gut, with Anders Andersson of the KTH Royal Institute of Technology and Science for Life Laboratory as the senior author. Other researchers in the study come from Linköping University, Karolinska Institutet (KI), Örebro University and the University of Glasgow, Scotland.

Those that were delivered by Caesarean section had a less diverse gut microbiota during their first two years of life than those born vaginally. Particularly clear was the low diversity among the group Bacteroidetes that, according to earlier observations of the research groups, are particularly linked to protection against allergies.  Thus, these children may run greater risk of developing allergies, but diabetes and irritable bowel syndrome are also more common among children born by Caesarean.

“Sometimes Caesarean sections are necessary. But it is important that both expectant mothers and doctors are aware that such a delivery may affect the child’s health,” says Maria Jenmalm, professor of Experimental Allergology at Linköping University and one of the authors of the article.

Everything indicates that right up until the moment of birth the child’s gut is completely sterile. Colonisation by many different bacteria is believed to be necessary for the immune system to develop and mature over the first years of life. If this does not happen there is a risk that the system can overreact against innocuous antigens in its surroundings, for example foodstuffs. Children affected by such allergies run a six times greater risk of developing asthma in their school years.

With natural birth the child is exposed to bacteria in the mother’s birth canal, a good start to the formation of the child’s own gut microbiota.

For those who entered the world through an incision in their mother’s belly, different measures need to be developed.

“It might not be so good to have six months of only breast feeding. Earlier exposure to ordinary solid food may stimulate a higher diversity of the gut microbiota,” Jenmalm says.

A more radical idea is now being tested by researchers in Puerto Rico. In the study a number of pregnant women have their vaginal microbiota screened before their planned Caesarean. After the birth the midwife takes a compress with secretions from the mother’s vagina and smears it over the baby’s face. The theory is that in this way the important bacteria may be transferred to the child. A similar study in Sweden is being planned.

Besides a greater diversity in their intestinal flora, children delivered vaginally in the Linköping study also had higher blood plasma levels of substances linked to Th1 cells, a kind of “chief cells” in the immune system, which can inhibit allergic immune responses.

The gut microbiota may be regarded as the biggest organ in the body. In the small and large intestines of an adult, there are at least ten times more bacteria than there are cells in the body. The number of species in a human exceeds 100. They use the nutrients in what we eat and in return for the food they provide a range of services. For example, some of them produce antibiotic-like substances which can kill off other unpleasant bacteria.

“One condition for these new insights into this fascinating universe of bacteria is the recent advances in biotechnology. With modern DNA sequencing and computer analysis methods we can determine the species composition in hundreds of samples at the same time, and even get an idea of what characteristics the bacteria have,” says Anders Andersson, researcher in metagenomics at the KTH Royal Institute of Technology and Science for Life Laboratory.