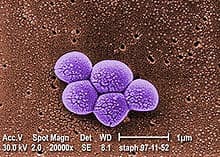 A strain of bacteria that causes skin and soft tissue infections in humans originally came from cattle, according to a study to be published in mBio®, the online open-access journal of the American Society for Microbiology.

The researchers who conducted the genetic analysis of strains of Staphylococcus aureus known as CC97 say these strains developed resistance to methicillin after they crossed over into humans around forty years ago. Today, methicillin-resistant S. aureus (MRSA) strain CC97 is an emerging human pathogen in Europe, North and South America, Africa, and Asia. The findings highlight the potential for cows to serve as a reservoir for bacteria with the capacity for pandemic spread in humans.

The researchers sequenced the genomes of 43 different CC97 isolates from humans, cattle, and other animals, and plotted their genetic relationships in a phylogenetic tree. Corresponding author Ross Fitzgerald of the Roslin Institute and the University of Edinburgh in Scotland says strains of CC97 found in cows appear to be the ancestors of CC97 strains from humans.

“Bovine strains seemed to occupy deeper parts of the phylogenetic tree – they were closer to the root than the human strains. This led us to conclude that the strains infecting humans originated in cows and that they had evolved from bovine to human host jumps,” says Fitzgerald.

Although the CC97 strains from animals were quite genetically diverse, the human isolates cluster together in two tight, distinct “clades”, or relatedness groups, indicating that S. aureus CC97 in cattle crossed over into humans on two separate occasions. Using mutation rates as a molecular clock, the authors determined that the ancestor of clade A jumped from a bovine host to humans between 1894 and 1977 and clade B made the jump between 1938 and 1966.

After they made the jump, the human CC97 strains acquired some new capabilities, says Fitzgerald, thanks to genes encoded on portable pieces of DNA called mobile genetic elements.

“It seems like these elements, such as pathogenicity islands, phages, and plasmids, are important in order for the bacterium to adapt to different host species,” says Fitzgerald. “The reverse is true as well: the bovine strains have their own mobile genetic elements.”

Perhaps the most problematic new capability the human strains acquired is the ability to resist methicillin, an important antibiotic for fighting staphylococcal infections. Only human strains of CC97 were able to resist the drug, which indicates that the bacteria acquired resistance after they crossed over into humans, presumably through exposure to antibiotics prescribed for treating human infections.

This sequence of events contrasts with the case of a S. aureus strain from pigs, Fitzgerald points out, since a study in 2012 revealed that MRSA ST398 strains evolved the ability to resist methicillin before they crossed over into humans (http://mbio.asm.org/content/3/1/e00305-11). Any number of factors could create these differences, making pigs – but not cattle – a source of a drug-resistant bacterium. At this point, though, there isn’t enough information to say whether differences in the S. aureus strains, differences between pigs and cattle, or differences between swine and dairy farming practices might be responsible.

Moving forward, Fitzgerald says he and his colleagues plan to widen the investigation.

“We have a relatively small sample size, and the findings are robust, but we want to extend the study now to include a greater number of clones to get a bigger picture of what’s going on across the S. aureus species,” says Fitzgerald.

A wider variety of S. aureus strains, Fitzgerald says, from a wider variety of locations and hosts and a wider range of time, will allow them to better pinpoint the timing and circumstances of the host jump events. Understanding how and when MRSA has crossed over from other species in the past can help us to put the brakes on these crossovers in the future and hopefully prevent the birth of the next pandemic S. aureus strain.

1 thought on “MRSA strain in humans originally came from cattle”