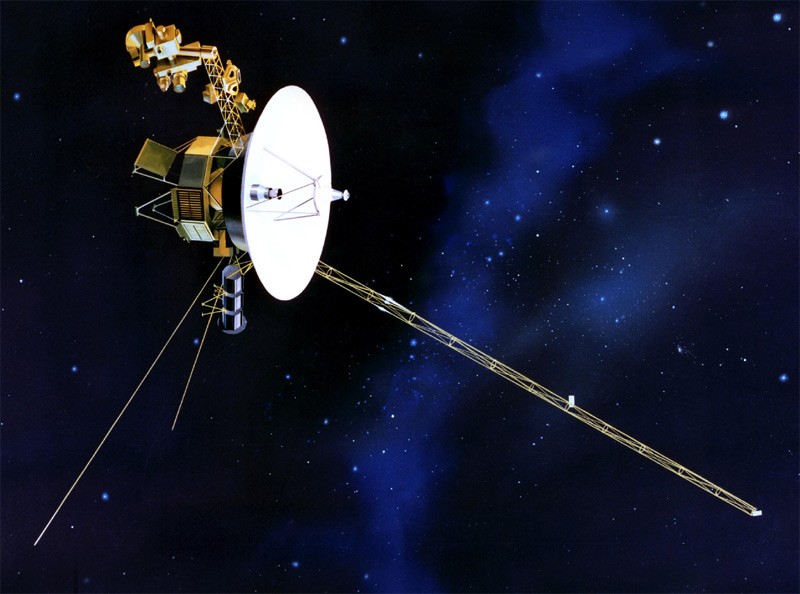 Voyager 1 appears to have at long last left our solar system and entered interstellar space, says a University of Maryland-led team of researchers.

Carrying Earthly greetings on a gold plated phonograph record and still-operational scientific instruments – including the Low Energy Charged Particle detector designed, built and overseen, in part, by UMD’s Space Physics Group – NASA’s Voyager 1 has traveled farther from Earth than any other human-made object. And now, these researchers say, it has begun the first exploration of our galaxy beyond the Sun’s influence.

“It’s a somewhat controversial view, but we think Voyager has finally left the Solar System, and is truly beginning its travels through the Milky Way,” says UMD research scientist Marc Swisdak, lead author of a new paper published online this week in The Astrophysical Journal Letters. Swisdak and fellow plasma physicists James F. Drake, also of the University of Maryland, and Merav Opher of Boston University have constructed a model of the outer edge of the Solar System that fits recent observations, both expected and unexpected.

Their model indicates Voyager 1 actually entered interstellar space a little more than a year ago, a finding directly counter to recent papers by NASA and other scientists suggesting the spacecraft was still in a fuzzily-defined transition zone between the Sun’s sphere of influence and the rest of the galaxy.

But why the controversy?
At issue is what the boundary-crossing should look like to Earth-bound observers 11 billion miles (18 billion kilometers) away.  The Sun’s envelope, known as the heliosphere, is relatively well-understood as the region of space dominated by the magnetic field and charged particles emanating from our star.  The heliopause transition zone is both of unknown structure and location.  According to conventional wisdom, we’ll know we’ve passed through this mysterious boundary when we stop seeing solar particles and start seeing galactic particles, and we also detect a change in the prevailing direction of the local magnetic field.

To explain this unexpected observation, many scientists theorize that Voyager 1 has entered a “heliosheath depletion region,” but that the probe is still within the confines of the heliosphere. Swisdak and colleagues, who are not part of the Voyager 1 mission science teams, say there is another explanation.

In previous work, Swisdak and Drake have focused on magnetic reconnection, or the breaking and reconfiguring of close and oppositely-directed magnetic field lines.  It’s the phenomenon suspected to lurk at the heart of solar flares, coronal mass ejections and many of the sun’s other dramatic, high-energy events.  The UMD researchers argue that magnetic reconnection is also key to understanding NASA’s surprising data.

Though often depicted as a bubble encasing the heliosphere and its contents, the heliopause is not a surface neatly separating “outside” and “inside.”  In fact, Swisdak, Drake and Opher assert that the heliopause is both porous to certain particles and layered with complex magnetic structure.  Here, magnetic reconnection produces a complex set of nested magnetic “islands,” self-contained loops which spontaneously arise in a magnetic field due to a fundamental instability.  Interstellar plasma can penetrate into the heliosphere along reconnected field lines, and galactic cosmic rays and solar particles mix vigorously.

Most interestingly, drops in solar particle counts and surges in galactic particle counts can occur across “slopes” in the magnetic field, which emanate from reconnection sites, while the magnetic field direction itself remains unchanged.  This model explains observed phenomena from last summer, and Swisdak and his colleagues suggest that Voyager 1 actually crossed the heliopause on July 27, 2012.

In a NASA statement, Ed Stone, Voyager project scientist and a professor of physics of the California Institute of Technology, says, in part, “Other models envision the interstellar magnetic field draped around our solar bubble and predict that the direction of the interstellar magnetic field is different from the solar magnetic field inside. By that interpretation, Voyager 1 would still be inside our solar bubble. The fine-scale magnetic connection model [of Swisdak and colleagues] will become part of the discussion among scientists as they try to reconcile what may be happening on a fine scale with what happens on a larger scale.”  Read the full NASA Voyager statement here: http://www.nasa.gov/mission_pages/voyager/voyager20130815.html.

Voyager Interstellar Mission
In the 36th year after their 1977 launches, the twin Voyager 1 and 2 spacecraft continue exploring where nothing from Earth has flown before. Their primary mission was the exploration of Jupiter and Saturn. After making a string of discoveries there — such as active volcanoes on Jupiter’s moon Io and intricacies of Saturn’s rings — the mission was extended. Voyager 2 went on to explore Uranus and Neptune, and is still the only spacecraft to have visited those outer planets. The current mission for both spacecraft, the Voyager Interstellar Mission, is to explore the outermost edge of the Sun’s domain and beyond. Both Voyagers are capable of returning scientific data from a full range of instruments, with adequate electrical power and attitude control propellant to keep operating until 2020. Voyager 2 is expected to enter interstellar space a few years after its twin. The Voyager spacecraft were built and continue to be operated by NASA’s Jet Propulsion Laboratory, in Pasadena, Calif.

University of Maryland scientists lead the Deep Impact spacecraft science team and are part of the science teams of many of the other spacecraft exploring our Solar System, including both Voyagers and Cassini.

2 thoughts on “Voyager 1 Has Left the Solar System”