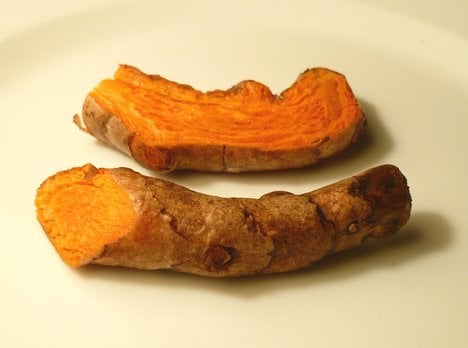 Thalidomide was first introduced in the 1950s as an anti-nausea medication to help control morning sickness, but was later taken off the shelves in 1962 because it was found to cause birth defects. In the late 1990’s the drug was re-introduced as a stand-alone or combination treatment for multiple myeloma. Turmeric, an ancient spice grown in India and other tropical regions of Asia, has a long history of use in herbal remedies and has recently been studied as a means to prevent and treat cancer, arthritis and Alzheimer’s disease. According to the American Cancer Society, laboratory studies have shown that curcumin, an active ingredient in turmeric, interferes with several important molecular pathways and inhibits the formation of cancer-causing enzymes in rodents.

“Although thalidomide disturbs the microenvironment of tumor cells in bone marrow, it disintegrates in the body. Curcumin, also active against cancers, is limited by its poor water solubility. But the combination of thalidomide and curcumin in the hybrid molecules enhances both the cytotoxicity and solubility,” says the study’s lead researcher Shijun Zhang, assistant professor in the Department of Medicinal Chemistry at the VCU School of Pharmacy.

The hybrid molecules of turmeric and thalidomide created more than 15 compounds, each with a different effect. Scientists found that compounds 5 and 7 exhibited superior cell toxicity compared to curcumin alone or the combination of curcumin and thalidomide. Furthermore, the compounds were found to induce significant multiple myeloma cell death.

“Overall, the combination of the spice and the drug was significantly more potent than either individually, suggesting that this hybrid strategy in drug design could lead to novel compounds with improved biological activities,” added Grant. “The results also strongly encourage further optimization of compounds 5 and 7 to develop more potent agents as treatment options for multiple myeloma.”