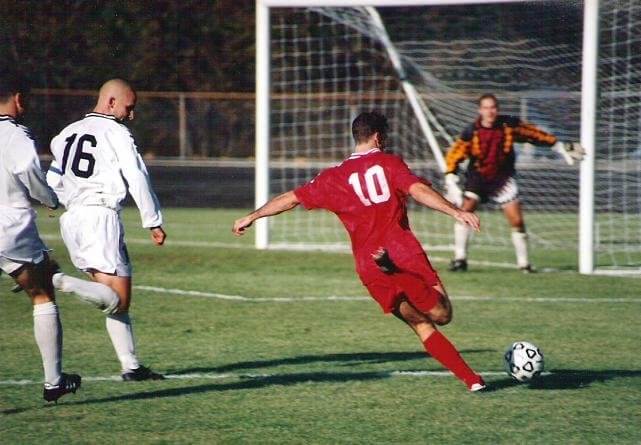 The everyday physical activities of an isolated group of forager-farmers in central Bolivia are providing valuable information about how industrialization and its associated modern amenities may impact health and wellness.

Studying short-term spikes in the testosterone levels of Tsimane men, UC Santa Barbara anthropologists Ben Trumble and Michael Gurven have found that the act of chopping down trees –– a physically demanding task that is critical to successful farming and food production –– results in greater increases in testosterone than does a directly competitive activity such as soccer. Their research appears in the early online edition of the journal Evolution and Human Behavior.

“With the Tsimane, we see an environment that is more like that in which humans evolved, and for which our systems are calibrated,” said Trumble, a postdoctoral researcher in anthropology at UCSB and the paper’s lead author. The paper was written with Gurven, a UCSB professor of anthropology and co-director of the Tsimane Health and Life History Project, a collaboration between UCSB and the University of New Mexico.

According to Trumble, whose research lies at the intersection of hormones, behavior, and the environment, testosterone levels are closely related to the availability of food energy. When young men skip even a single meal, their testosterone levels can drop as much as 10 percent. Fast for a couple of days, and they decrease to castrate levels.

“The same is true for infection,” he added. “An infection from a pathogen or parasite –– even injuries, burns, or surgery –– all cause an immediate decrease in testosterone.”

The body uses food energy for a number of critical processes. Among them are building muscle mass and maintaining proper immune function. When food energy is limited, the body has to choose between one and the other. For populations in industrialized countries like the United States, there isn’t much of a tradeoff,” Trumble said. “I can go to the grocery store and gather 20,000 calories in 10 minutes without breaking a sweat. I don’t have to worry about a deficit.”

However, for a group such as the Tsimane, who are more physically active than most Americans –– and use a lot more food energy –– but also have to grow, hunt, or fish for the vast majority of the calories they consume, the tradeoff is much greater. In addition, the Tsimane’s regular exposure to pathogens and parasites requires additional calories for maintaining necessary immune function.

Previous studies by Trumble, Gurven, and others have demonstrated that competitive activity –– such as soccer –– causes a short-term spike in testosterone. “Past research has mostly focused on the role of testosterone in aggressive competition,” Trumble said. “Given the important of testosterone in supplying energy to muscles, we wanted to look at how testosterone changes during another vital part of Tsimane life –– food production.” He and the research team collected saliva specimens from Tsimane men before and after an hour of tree chopping, just as previous studies had examined saliva specimens taken from Tsimane men immediately before and after an hour of soccer. “With soccer, we saw a 30.1 percent increase in testosterone,” Trumble said. “With chopping, we saw a 46.8 percent increase. It was significantly greater.”

The acute spike in testosterone increases the muscle’s ability to take in blood sugar, which, in turn, enhances soccer performance and reaction times. It turns out the same is true for tree chopping. “If you’re better able to pull blood sugar into your muscle tissue, and better able to use that energy, you’ll be able to chop more trees,” Trumble explained.

“One of the important take-home messages of this study is that over the course of human evolution, we had very physical strategies for producing calories. It’s important to think about how testosterone fits into that. We needed to maintain testosterone in order to maintain muscle mass, and also to spike testosterone when necessary. If you’re a 50-year-old Tsimane man, for example, you probably have six or more children, and you need to be able to feed them. If you lose the ability to have the acute spikes in testosterone that increase your ability to chop trees –– chop longer and chop harder –– that would be detrimental to feeding your family.”

Trumble noted that in many societies women produce a significant portion of calories, and other researchers have reported acute spikes in testosterone during physical activity for women, despite their very low baseline levels. “While we didn’t measure the testosterone of women in this study, women can also produce short-term spikes, which suggests the importance of acute rises in testosterone not only for competition over mates, but also for critical daily tasks such as food production.”