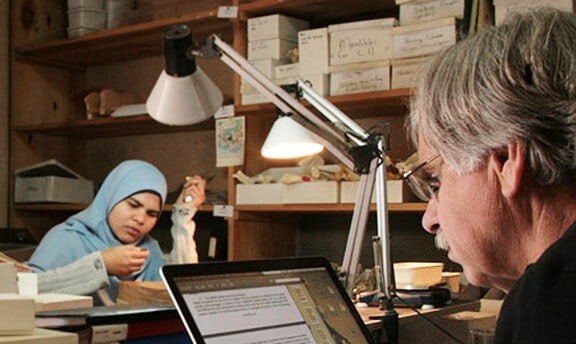 Who built them—slaves, or well-compensated workers? How were they built? What are they made of? What do they symbolize?

Nearly everything about the Egyptian pyramids raises questions and inspires scientific investigation; they are the classic riddle, wrapped in a mystery, inside geometric walls of limestone.

One of the greatest mysteries: What did the pyramid builders eat?

It had to be enough to sustain the workers through grueling days, weeks, years. Research led by Richard Redding, a research scientist at the Kelsey Museum of Archaeology, has helped shed light on the answer to this question. In short, the builders ate meat. Lots and lots of meat. Often with a side of meat.

“They probably had better diets than [people] did in the village. They definitely had more meat,” said Redding, (’71, Ph.D. ’81), also chief research officer and archaeozoologist at Ancient Egypt Research Associates (AERA), a nongovernmental organization that runs a field school at the Giza pyramids.

Photo (top): Richard Redding (right) in the lab with a colleague.

Bringing Up the Bones

Redding’s team made the discovery of the meat-heavy diet based on 175,000 animal bones and bone fragments found at the Giza pyramid settlement—mostly cattle, sheep, and goats, with a smaller number of pig bones. He and other archaeologists from AERA, along with other U-M archaeology students who worked at the site through the years, studied the bones to estimate the large amount of meat that would have gone to the workers. They also looked for an explanation of where the animals were raised and slaughtered.

They made the assumption, based on their findings, that the Giza settlement was run by a central authority or administration. “The administrators would have organized drives of sheep, goats, and cattle from the Nile Delta, along the edge of the high desert, to move the required animals to Giza,” Redding said. The workers’ town was located about 1,300 feet south of the Sphinx, and was used to house workers building the pyramid of the pharaoh Menkaure. The process of taking the meat directly to the workers inspired a news headline about Redding’s research that read, “Ancient Burger Vans.”

While Redding and his AERA team are looking at animal bones, their main goal isn’t to learn more about the animals but rather the people who built the only one of the Seven Wonders of the Ancient World still in existence.

“We’re trying to humanize the pyramids, to put people there, by finding out where the workers lived and how they lived,” said Redding, who began working on Old Kingdom sites in Egypt since 1983 after leaving a politically turbulent Iran.

Unearthing the details about the workers’ lives is a long, often tedious process of, for instance, sorting the tens of thousands of animal bones, while also applying Redding’s rich knowledge of animal behavior to figure out how the raising and transport of such huge numbers of animals was possible in ancient times.

3 thoughts on “The Diet of Pyramid Builders: What Did They Eat?”