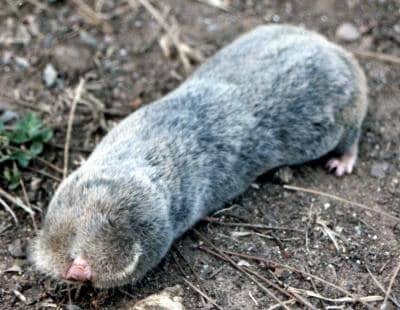 Like naked mole-rats (Heterocephalus gaber), blind mole-rats (of the genus Spalax) live underground in low-oxygen environments, are long-lived and resistant to cancer. A new study demonstrates just how cancer-resistant Spalax are, and suggests that the adaptations that help these rodents survive in low-oxygen environments also play a role in their longevity and cancer resistance.

The findings are reported in the journal Biomed Central: Biology.

“We’ve shown that, compared to mice and rats, blind mole-rats are highly resistant to carcinogens,” said Mark Band, the director of functional genomics at the University of Illinois Biotechnology Center and a co-author on the study. Band led a previous analysis of gene expression in blind mole-rats living in low-oxygen (hypoxic) environments. He found that genes that respond to hypoxia are known to also play a role in aging and in suppressing or promoting cancer.

“We think that these three phenomena are tied in together: the hypoxia tolerance, the longevity and cancer resistance,” Band said. “We think all result from evolutionary adaptations to a stressful environment.”

Unlike the naked mole-rat, which lives in colonies in Eastern Africa, the blind mole-rat is a solitary rodent found in the Eastern Mediterranean. Thousands of blind mole-rats have been captured and studied for more than 50 years at Israel’s University of Haifa, where the animal work was conducted. The Haifa scientists observed that none of their blind mole-rats had ever developed cancer, even though Spalax can live more than 20 years. Lab mice and rats have a maximum lifespan of about 3.5 years and yet regularly develop spontaneous cancers.

To test the blind mole-rats’ cancer resistance, the Haifa team, led by Irena Manov, Aaron Avivi and Imad Shams, exposed the animals to two cancer-causing agents. Only one of the 20 Spalax tested (an animal that was more than 10 years old) developed malignant tumors after exposure to one of the carcinogens. In contrast, all of the 12 mice and six rats exposed to either agent developed cancerous tumors.

To help explain these results, Band and his colleagues looked to the gene expression profiles obtained from their previous studies of blind mole-rats in hypoxic environments. The researchers had found that genes that regulate DNA repair, the cell cycle and programmed cell death are differentially regulated in Spalax when exposed to normal, above-ground oxygen levels (21 percent oxygen) and conditions of hypoxia (3, 6 and 10 percent oxygen). These changes in gene regulation differed from those of mice or rats under the same conditions, the researchers found.

Spalax naturally have a variant in the p53 gene (a transcription factor and known tumor suppressor), which is identical to a cancer-related mutation in humans, Band said. Transcription-factor genes code for proteins that regulate the activity of other genes and so affect an animal’s ability to respond to its environment. The research group in Israel showed “that the Spalax p53 suppresses apoptosis (programmed cell death), however enhances cell cycle arrest and DNA repair mechanisms,” he said.

Hypoxia can damage DNA and contribute to aging and cancer, so mechanisms that protect against hypoxia – by repairing DNA, for example – likely also help explain the blind mole-rat’s resistance to cancer and aging, Band said.

“So now we know there’s overlap among the genes that affect DNA repair, hypoxia tolerance and cancer suppression,” he said. “We haven’t been able to show the exact mechanisms yet, but we’re able to show that in Spalax they’re all related. One of the lessons of this research is that we have a new model animal to study mechanisms of disease, and possibly discover new therapeutic agents.”