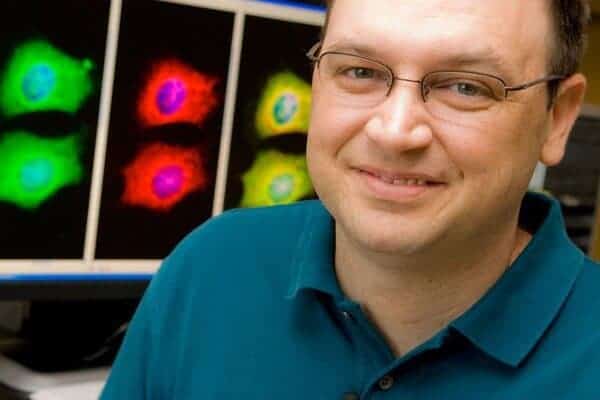 A stress-related protein genetically linked to depression, anxiety and other psychiatric disorders contributes to the acceleration of Alzheimer’s disease, a new study led by researchers at the University of South Florida has found.

When the stress-related protein FKBP51 partners with another protein known as Hsp90, this formidable chaperone protein complex prevents the clearance from the brain of the toxic tau protein associated with Alzheimer’s disease.

Under normal circumstances, tau helps make up the skeleton of our brain cells.  The USF study was done using test tube experiments, mice genetically engineered to produce abnormal tau protein like that accumulated in the brains of people with Alzheimer’s disease, and post-mortem human Alzheimer’s brain tissue.

The researchers report that FKBP51 levels increase with age in the brain, and then the stress-related protein partners with Hsp90 to make tau more deadly to the brain cells involved in memory formation.

However, as FKBP51 levels rise with age, they usurp Hsp90’s beneficial effect to promote tau toxicity.

“We found that FKB51 commandeers Hsp90 to create an environment that prevents the removal of tau and makes it more toxic,” said the study’s principal investigator Chad Dickey, PhD, associate professor of molecular medicine at the USF Health Byrd Alzheimer’s Institute. “Basically, it uses Hsp90 to produce and preserve the bad tau.”

The researchers conclude that developing drugs or other ways to reduce FKB51 or block its interaction with Hsp90 may be highly effective in treating the tau pathology featured in Alzheimer’s disease, Parkinson’s disease dementia and several other disorders associated with memory loss.

A previous study by Dr. Dickey and colleagues found that a lack of FKBP51 in old mice improved resilience to depressive behavior.

The latest study was supported by a grant from the National Institute of Neurological Disorders and Stroke.