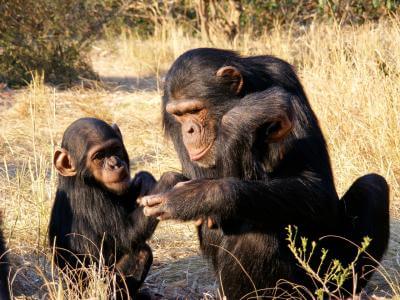 Orphaned chimpanzees are less socially competent than chimpanzees who were reared by their mother.

Researchers from the Max Planck Institute for Psycholinguistics in Nijmegen, The Netherlands, observed that orphaned chimpanzees frequently engaged in social play, but their play bouts were much shorter and resulted in aggression more often. Apparently, chimpanzee mothers endow their offspring with important social skills.

It may not come as a surprise, but mother chimpanzees seem to be important for the development of social skills in young chimpanzees. “Orphaned chimpanzees had more difficulties to successfully coordinate their social play interactions,” says Edwin van Leeuwen from the Comparative Cognitive Anthropology Research Group at the Max Planck Institute for Psycholinguistics. “Since social play comprises a complex context in which signals about intentions need to be communicated, it seems that orphaned chimpanzees have missed out on valuable lessons from their mothers.”

Van Leeuwen and his co-authors Innocent Mulenga and Diana Lisensky compared the play behaviour of 8 orphaned and 9 mother-reared juvenile chimpanzees at the Chimfunshi Wildlife Orphanage Trust in Zambia. In this institution the orphan chimpanzees are initially cared for by humans. As soon as they are strong enough – usually with one or two years of age – they grow up in an orphan chimp group. “The chimps in the study were between four and nine years old, so they have kind of been raising each other”, explains van Leeuwen. The orphaned and mother-reared chimpanzees matched in age and sex.

Based on previous research, the scientists expected the orphaned juveniles to play less frequently and smoothly than the mother-reared chimpanzees: After all, the orphans had missed their most important caretaker throughout a sensitive socialisation period, and continued to lack a safe and facilitating social environment provided by their mothers.

Just like in humans, chimpanzee mothers seem to be important for the development of adequate social skills in their offspring, the researchers conclude. Van Leeuwen: “Mothers seem to prepare their offspring for challenges that are very important for successful group-living. For orphans, however, the presence of other adult role models may alternatively be beneficial for boosting social competence, which is an important consideration to entertain for sanctuaries dealing with integrations of chimpanzees.”