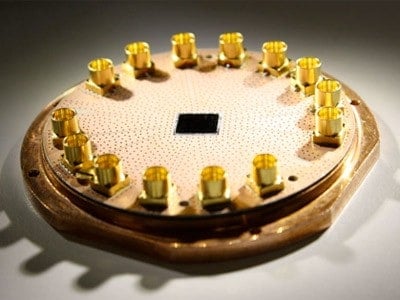 A team of University of Queensland physicists has transmitted an atom from one location to another inside an electronic chip.

The team, which includes Dr Arkady Fedorov and Dr Matthias Baur from UQ’s ARC Centre of Excellence for Engineered Quantum Systems and the School of Mathematics and Physics, published its findings in Nature this month.

Dr Fedorov said the team had achieved quantum teleportation for the first time, which could lead to larger electronic networks and more functional electronic chips.

“This is a process by which quantum information can be transmitted from one place to another without sending a physical carrier of information,” Dr Fedorov said.

“In this process the information just appears at the destination, almost like teleportation used in the famous science fiction series Star Trek.”

Dr Fedorov said the key resource of quantum teleportation was a special type of correlation, called entanglement, shared between a sender and a receiver.

“Once entanglement is created, this ‘impossible’ information transfer becomes in fact possible thanks to laws of quantum mechanics,” Dr Fedorov said.

“For the first time, the stunning process of quantum teleportation has now been used in a circuit to relay information from one corner of the sample to the other.

“What makes our work interesting is the system uses a circuit, much like modern computer chips.

“In our system the quantum information is stored in artificial structures called quantum bits, and you can even see them with your bare eyes.

“This is surprising because people typically expect quantum only at atomic scales, not even visible with electronic microscopes.

“This quantum information allows us to do teleportation with impressive speed and accuracy above what has been achievable to date.”

“In our Superconducting Quantum Devices laboratory at UQ we are using this technology to further enhance our knowledge about the quantum nature,” Dr Fedorov said.

“Eventually this technology will be used to create more powerful devices.”

This research indicates that questions relating to the physics of quantum communication can be addressed using electronic circuits at microwave frequencies.

“One may even foresee future experiments in which quantum information will be distributed over larger distances directly by microwave to optical interfaces for quantum communication,” Dr Fedorov said.

Teleportation is expected to find applications in secure communication and in more efficient information processing based on the laws of quantum physics.

Dr Arkady Fedorov and Dr Matthias Baur moved from ETH Zurich where the research was conducted to UQ in January this year.

Dr Fedorov is a Chief Investigator in the Australia Research Council Centre of Excellence for Engineered Quantum Systems (EQuS).

EQuS aims to initiate the Quantum Era in the 21st century by engineering designer quantum systems.

Through focused and visionary research, EQuS will deliver new scientific insights and fundamentally new technical capabilities across a range of disciplines.

Impacts of this work will improve the lives of Australians and people all over the world by producing breakthroughs in physics, engineering, chemistry, biology and medicine.

2 thoughts on “Teleport: Scientists transmit an atom from one location to another inside electronic chip”