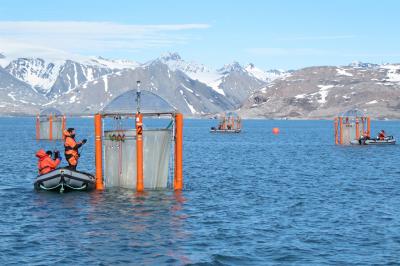 As the climate changes and oceans’ acidity increases, tiny plankton seem set to succeed. An international team of marine scientists has found that the smallest plankton groups thrive under elevated carbon dioxide (CO2) levels. This could cause an imbalance in the food web as well as decrease ocean CO2 uptake, an important regulator of global climate. The results of the study, conducted off the coast of Svalbard, Norway, in 2010, are now compiled in a special issue published in Biogeosciences, a journal of the European Geosciences Union.

“If the tiny plankton blooms, it consumes the nutrients that are normally also available to larger plankton species,” explains Ulf Riebesell, a professor of biological oceanography at the GEOMAR Helmholtz Centre for Ocean Research Kiel in Germany and head of the experimental team. This could mean the larger plankton run short of food.

Large plankton play an important role in carbon export to the deep ocean, but in a system dominated by the so-called pico- and nanoplankton, less carbon is transported out of surface waters. “This may cause the oceans to absorb less CO2 in the future,” says Riebesell.

The potential imbalance in the plankton food web may have an even bigger climate impact. Large plankton are also important producers of a climate-cooling gas called dimethyl sulphide, which stimulates cloud-formation over the oceans. Less dimethyl sulphide means more sunlight reaches the Earth’s surface, adding to the greenhouse effect. “These important services of the ocean may thus be significantly affected by acidification.”

Ecosystems in the Arctic are some of the most vulnerable to acidification because the cold temperatures here mean that the ocean absorbs more carbon dioxide. “Acidification is faster there than in temperate or tropical regions,” explains the coordinator of the European Project on Ocean Acidification (EPOCA), Jean-Pierre Gattuso of the Laboratory of Oceanography of Villefranche-sur-Mer of the French National Centre for Scientific Research (CNRS).

The increasing acidity is known to affect some calcifying organisms in the Arctic, including certain sea snails, mussels and other molluscs. But scientists did not know until now how ocean acidification alters both the base of the marine food web and carbon transport in the ocean.

The five-week long field study conducted in the Kongsfjord off the Arctic archipelago of Svalbard, under the EPOCA framework, intended to close this knowledge gap. For the experiment, the scientists deployed nine large ‘mesocosms’, eight-metre long floatation frames carrying plastic bags with a capacity of 50 cubic metres. These water enclosures, developed at GEOMAR, allow researchers to study plankton communities in their natural environment under controlled conditions, rather than in a beaker in the lab. Few studies have looked at whole communities before.

The scientists gradually added CO2 to the mesocom water so that it reached acidity levels expected in 20, 40, 60, 80 and 100 years, with two bags left as controls. They also added nutrients to simulate a natural plankton bloom, as reported in the Biogeosciences special issue.

The team found that, where CO2 was elevated, pico- and, to a lesser extent, nanoplankton grew, drawing down nutrients so there were less available to larger plankton. “The different responses we observed made it clear that the communities’ sensitivity to acidification depends strongly on whether or not nutrients are available,” Riebesell summarises.

“Time and [time] again the tiniest plankton benefits from the surplus CO2, they produce more biomass and more organic carbon, and dimethyl sulphide production and carbon export are decreasing,” he concludes.