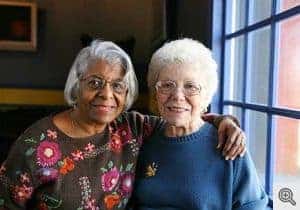 Here’s some neighborly advice for adults over age 50: Stay friendly with your neighbors.

A new University of Michigan study shows that adults in this age bracket who live in a good neighborhood with trustworthy people lowered their risk of stroke up to 48 percent.

Feeling connected with neighbors builds what researchers describe as “neighborhood social cohesion.” The trust and connection with neighbors was associated with a reduced risk of stroke above and beyond the effects of negative psychological factors—such as depression and anxiety, said Eric Kim, a doctoral student in the U-M Department of Psychology and the study’s lead author.

Other studies have focused on how negative neighborhood factors such as violence, noise, traffic, litter and poor air quality can increase poor health. The U-M research is among the first studies to examine how positive neighborhood assets might enhance good health.

“Studies in the past have typically looked at a neighborhood’s physical environment and its association with health, for example the number of fast food restaurants in an area,” Kim said. “We looked at the social environment.”

This study builds upon the growing literature that suggests the importance of a neighborhood’s social climate on health, he said.

Researchers used data from a nationally representative sample of 6,740 adults over the age of 50. Participants, who had never suffered a stroke, were asked to indicate the degree of trust in their neighborhood, with higher scores indicating more cohesion with neighbors. They also disclosed some information on chronic illnesses (e.g., high blood pressure, heart problems and diabetes) and psychological factors.

Among the sample, 265 respondents had a stroke during the four-year follow-up (46 fatal, 219 nonfatal). But the research indicated that the higher perceived neighborhood social cohesion was associated with a lower risk of stroke.

The researchers noted that the study did not assess the risks of stroke based on ethnicity, nor were respondents asked about their family’s medical history, especially as it relates to cardiovascular diseases.

The study, which was co-authored by Nansook Park and Christopher Peterson, appears in the online issue of Social Science & Medicine. The Robert Wood Johnson Foundation provided support for the study.