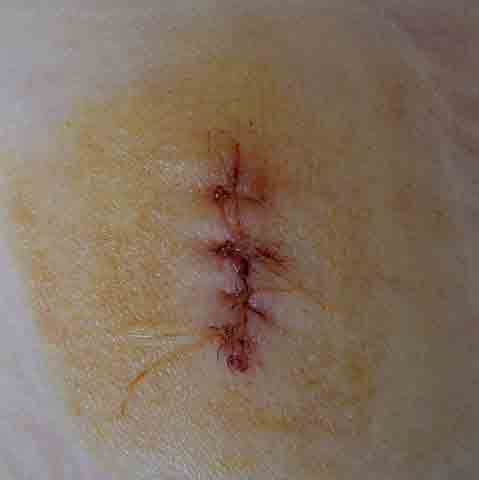 Scientists at The Scripps Research Institute (TSRI) have discovered an important process by which special immune cells in the skin help heal wounds.

They found that these skin-resident immune cells function as “first responders” to skin injuries in part by producing the molecule known as interleukin-17A (IL-17A), which wards off infection and promotes wound healing.

“This appears to be a critical and unique component of mammals’ defense against skin wounds, and we hope that it will point the way towards better therapies for people with difficulties in healing wounds,” said TSRI Professor Wendy L. Havran.

Havran was senior author of the study, which was published this week online ahead of print by the Journal of Clinical Investigation.

Havran and other researchers have shown in recent years that special immune cells known as dendritic epidermal T cells (DETCs) are the only resident T cell population in the outer layer of skin (epidermis) of mice—and are resident in human skin, too. These cells are now thought to serve as the immune system’s principal sentinels in the skin—when they detect damage signals from nearby wounded skin cells, they summon other, non-skin-resident immune cells to the site of the wound. Skin injuries in mice that have been bred to lack DETCs take much longer than normal to heal.

In the new study, Havran’s laboratory looked for new ways in which DETCs contribute to wound healing.

In one set of experiments, Senior Research Associate Amanda S. MacLeod, the lead author of the study, and other members of the team tried to determine whether DETCs in mice produce IL-17A in response to skin wounding. IL-17A had been considered mainly a recruiter of other immune cells and thus a promoter of inflammation in most places in the body. Havran and her colleagues had found evidence that it appears in and around skin wounds in mice soon after an injury occurs.

The scientists soon determined that mice that lack IL-17A activity healed wounds on their skin much more slowly than normal—very much like mice that lack DETCs. Applying IL-17A to the skin of such mice repaired their wound-healing defects. The team then showed that the rise in local IL-17A levels after a skin wound depended critically on the activation of skin-resident DETCs—pointing to these DETCs as the likely source of the immune signaling molecule. In the mice that lack IL-17A, adding normal DETCs from other mice fully restored a healthy wound-healing capacity and did so only when the added DETCs contained the gene that allows these cells to produce IL-17A.

The scientists found that DETCs are indeed the primary producers of IL-17A after skin injuries, but she observed that some and not all DETCs perform this function. “Only a subset produces IL-17A upon skin injury, although the surface markers on these cells seem identical to those of other DETCs,” MacLeod said. “Why only some DETCs respond to wounds in this way is something we plan to explore further.”

In a last series of tests, the scientists observed that DETCs started pumping out IL-17A as soon as they detected damage signals from nearby skin cells, called keratinocytes. The surge in IL-17A levels didn’t merely summon other immune cells into the skin. Even before those other immune cells arrived on the scene and inflammation set in, the IL-17A induced local keratinocytes to start making special proteins that are known to combat bacteria, viruses and other microbes—and are also known to promote the crucial skin regrowth and remodeling that are needed to heal a wound.

“This ‘cross-talk’ between skin-resident T cells and nearby keratinocytes is critical for re-establishing the skin barrier following wounding,” MacLeod said.

One of the next steps, Havran noted, will be to investigate whether a similar process occurs in human skin following wounds. “We’ve previously shown that skin-resident T cells normally contribute to wound healing in people, and that those same T cells are defective in some patients with chronic wounds,” she said. “Chronic wounds are an increasing clinical problem, particularly in the elderly, the disabled and people with diabetes, and so we hope that our results, particularly the wound-healing role of IL-17A, will help lead to better ways of treating such conditions.”

She notes, too, that IL-17A is often considered chiefly a pro-inflammatory factor, which some anti-inflammatory therapies are designed to suppress. “IL-17 inhibitors are now used in the treatment of the skin condition called psoriasis, which raises the possibility that those patients might become more susceptible to the development of chronic wounds,” she said.

Havran, MacLeod and their colleagues also hope to learn further details of the molecular cross-talk between DETCs and keratinocytes, as well as the role of DETCs in protecting against other environmental threats, such as the ultraviolet radiation that causes sunburn and skin cancers. “We suspect that these skin-resident T cells also help protect keratinocytes from ultraviolet-induced DNA damage,” MacLeod said.

About The Scripps Research Institute

The Scripps Research Institute (TSRI) is one of the world’s largest independent, not-for-profit organizations focusing on research in the biomedical sciences. TSRI is internationally recognized for its contributions to science and health, including its role in laying the foundation for new treatments for cancer, rheumatoid arthritis, hemophilia, and other diseases. An institution that evolved from the Scripps Metabolic Clinic founded by philanthropist Ellen Browning Scripps in 1924, the institute now employs about 3,000 people on its campuses in La Jolla, CA, and Jupiter, FL, where its renowned scientists—including three Nobel laureates—work toward their next discoveries. The institute’s graduate program, which awards PhD degrees in biology and chemistry, ranks among the top ten of its kind in the nation. For more information, see www.scripps.edu.