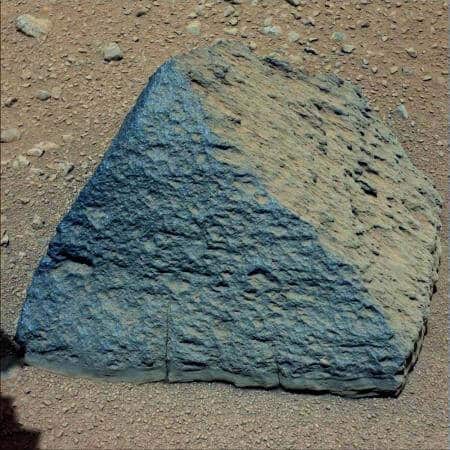 During the nearly 14 months that it has spent on the red planet, Curiosity, the Mars Science Laboratory (MSL) rover, has scooped soil, drilled rocks, and analyzed samples by exposing them to laser beams, X-rays, and alpha particles using the most sophisticated suite of scientific instruments ever deployed on another planet. One result of this effort was evidence reported last March that ancient Mars could have supported microbial life.

But Curiosity is far more than a one-trick rover, and in a paper published today in the journal Science, a team of MSL scientists reports its analysis of a surprisingly Earth-like martian rock that offers new insight into the history of Mars’s interior and suggests parts of the red planet may be more like our own than we ever knew.

The paper—whose lead author is Edward Stolper, Caltech’s William E. Leonhard Professor of Geology, provost, and interim president—is one of five appearing in the journal with results from the analysis of data and observations obtained during Curiosity’s first 100 martian days (sols). The other papers include an evaluation of fine- and coarse-grained soil samples and detailed analyses of the composition and formation process of a windblown drift of sand and dust.

“The results presented go beyond the question of habitability,” says John Grotzinger, MSL project scientist and Caltech’s Fletcher Jones Professor of Geology. “Mars Science Laboratory also has a major mission objective to explore and characterize the geological environment at all scales and also the atmosphere. In doing this we learn about the fundamental physical and chemical properties that distinguish the terrestrial planets from each other and also what they share in common.”

The rock was encountered by Curiosity a few weeks after it landed, during its slow drive across Gale Crater on the way toward the crater’s central peak, Mount Sharp. Visual inspection of the dark gray rock suggested that it was probably a fine-grained basaltic igneous rock formed by the crystallization of magma near the planet’s surface. The absence of obvious mineral grains on its essentially dust-free surface further suggested that it would have a relatively uniform (i.e., homogeneous) chemical composition.

For that reason, MSL’s scientists decided it would be a good test case for comparing the results obtained by two of the rover’s scientific instruments, the Alpha Particle X-ray Spectrometer (APXS) and ChemCam, both of which are used to measure the chemical compositions of rocks, sediments, and minerals.

The APXS analyses, however, produced some unanticipated results. Far from being similar in its chemical composition to the many martian igneous rocks analyzed by the Spirit and Opportunity rovers on the surface of Mars or to martian meteorites found on Earth, Jake_M is highly enriched in sodium and potassium, making it chemically alkaline.

Although Jake_M is very different from known martian rocks, Stolper and colleagues realized that it is very similar in its chemical composition to a relatively rare type of terrestrial igneous rock, known as a mugearite, which is typically found on ocean islands and in continental rift zones.

“We realized right away that although nothing like it had ever been found on Mars, Jake_M is similar in composition to terrestrial mugearites, which although uncommon are very well known to igneous petrologists who study volcanic rocks on Earth,” Stolper says. “In fact, if this rock were found on Earth, we would be hard pressed, based on its elemental composition, to tell it was not an Earth rock.” However, he notes, “such rocks are so uncommon on Earth that it would be highly unlikely that, if you landed a spacecraft on Earth in a random location, the first rock you encountered within a few hundred meters of your landing site would be an alkaline rock like Jake_M.”

On both Earth and Mars, basaltic liquids form by partial melting of rocks deep inside the planet. By analogy with terrestrial mugearites, Jake_M probably evolved from such a partial melt that cooled as it ascended toward the surface from the martian interior; as it cooled, crystals formed, and the chemical composition of the remaining liquid changed (just as, in the making of rock candy, a sugar-water solution becomes less sweet as it cools and sugar crystallizes from it).

“The minerals that crystallize have different elemental compositions than the melt and are either more dense or less dense than the liquid and thus tend to physically separate, that is, to settle to the bottom of the magma chamber or float to the top, causing the chemical composition of the remaining liquid to change,” Baker explains.

The MSL team then modeled the conditions required to produce a residual liquid similar in composition to Jake_M by crystallization of plausible partial melts. From those results, they inferred that the cooling and crystallization that eventually produced Jake_M probably occurred at pressures of several kilobars, the equivalent of the pressure at a depth of a few tens of kilometers beneath the martian surface. The modeling also suggested—particularly by analogy with terrestrial mugearites—that the martian magmas were relatively rich in dissolved water.

According to Stolper, Baker, and their colleagues, Jake_M probably originated via the melting of a relatively alkali- and water-rich martian mantle that was different from the sources of other known martian basalts. Because the primitive martian mantle is believed to have been as much as two times richer in sodium and potassium than Earth’s mantle, the researchers say that, in hindsight, it might not be surprising if alkaline magmas, which are so uncommon on Earth, are more common on Mars.

Moreover, Stolper adds, “there are many hypotheses for origin of alkaline magmas on Earth that are similar to Jake_M. Perhaps the most plausible is that regions deep in the mantle become enriched in alkalis by a process known as metasomatism, in which the chemical compositions of rocks are altered by the flow of water- and carbon-dioxide-rich fluids. The existence of Jake_M may be evidence that such processes also occur in the interior of Mars.”

Intriguingly, the potassium-rich nature of many of the sedimentary rocks that have been analyzed by the MSL mission may turn out to reflect the presence of such a region enriched in alkalis in the mantle underlying Gale Crater.

However, he says, “with only one rock having this odd chemical composition, we don’t want to get carried away. Is it a one-off, or is it a representative of an important class of igneous rocks from the Gale Crater region? Determining the answer to this will be an important goal for the ongoing MSL mission.”

“The paper by Stolper et al. shows that the internal composition of Mars is more similar to Earth than we had thought and illustrates how even a single rock can provide insight into the evolution of the planet as a whole,” Grotzinger says.