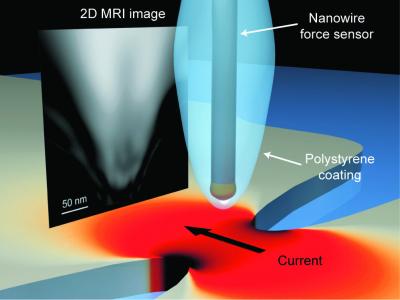 A team from the University of Illinois at Urbana-Champaign and Northwestern University has devised a novel nuclear magnetic resonance imaging (MRI) technique that delivers a roughly 10¬nanometer spatial resolution. This represents a significant advance in MRI sensitivity — modern MRI techniques commonly used in medical imaging yield spatial resolutions on the millimeter length scale, with the highest-resolution experimental instruments giving spatial resolution of a few micrometers.

“This is a very promising experimental result,” said U. of I. physicist Raffi Budakian, who led the research effort. “Our approach brings MRI one step closer in its eventual progress toward atomic-scale imaging.”

MRI is used widely in clinical practice to distinguish pathologic tissue from normal tissue. It is noninvasive and harmless to the patient, using strong magnetic fields and non-ionizing electromagnetic fields in the radio frequency range, unlike CT scans and tradiational X-rays, which both use more harmful ionizing radiation.

MRI uses static and time-dependent magnetic fields to detect the collective response of large ensembles of nuclear spins from molecules localized within millimeter-scale volumes in the body. Increasing the detection resolution from the millimeter to nanometer range would be a technological dream come true.

In their proof-of-principal demonstration, the team used an ultrasensitive magnetic resonance sensor based on a silicon nanowire oscillator to reconstruct a two-dimensional projection image of the proton density in a polystyrene sample at nanoscale spatial resolution.

“We expect this new technique to become a paradigm for nanoscale magnetic-resonance imaging and spectroscopy into the future,” added Budakian. “It is compatible with and can be incorporated into existing conventional MRI technologies.”

1 thought on “Nanoscale resolution MRI has been experimentally achieved”