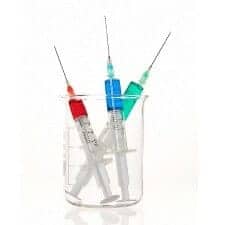 Controversy about the risks of measles, mumps, and rubella vaccines has been rumbling in the United States for years — and now it’s Israel’s turn.

After finding traces of the polio virus in sewage, Israel’s Ministry of Health launched a national vaccination campaign that reached more than half a million children. Surprisingly, dissenting voices flooded social media and the mainstream news, calling for a halt to the campaign. Endorsements by public figures, like Israel’s president Shimon Peres, did little to calm the storm.

Now a study led by researchers at Tel Aviv University demonstrates that nearly all pediatricians in Israel strongly support the vaccination of infants, but most do not believe that their role is to force treatment on parents. The study recommends that pediatricians use the art of persuasion, with the help of communication experts, as they discuss the risks and virtues of vaccination with parents.

“Our advice is that pediatricians find ways to communicate their views to parents in a respectful way that doesn’t discourage them from seeking treatment for their children,” says Dr. Ayala Maayan-Metzger of TAU’s Sackler Faculty of Medicine. “This is something experts in modern communication could help with.” The study was published in September in the journal Acta Paediatrica.

A clash of values

Every major medical body in the world — including Israel’s Ministry of Health, the American Medical Association, and the World Health Organization — recommends a battery of infant vaccinations. But over the past decade, an increasing number of parents have chosen not to comply. Studies have identified various reasons for this trend, including a growing distrust of professional expertise, unproven theories about a causal effect for autism, and the parents’ insistence on their own right to decide on medical care for their children.

Dr. Maayan-Metzger, who also works at the Department of Neonatology at The Edmond and Lili Safra Children’s Hospital at Sheba Medical Center, and Dr. Peri Kedem-Friedrich of Bar-Ilan University’s Psychology Department, set out with other TAU researchers to examine for the first time the issue of infant vaccination from the perspective of the working clinical physician. They hoped to understand pediatricians’ attitudes and treatment intentions toward parents who refuse to vaccinate their infants.

Ninety-two percent of the pediatricians agreed that vaccinations, which are widely available free of charge in Israel, are in infants’ best interest. Seventy-one percent expressed negative feelings toward parents who refuse to vaccinate their infants. But 37 percent agreed that parents have a right to decide, and another 37 percent agreed that vaccinations should be officially enforced. Two percent said they would object to treating children who had not been vaccinated.

“The findings show how strongly doctors here support the vaccination program and stand behind the Ministry of Health,” says Maayan-Metzger. “It’s not a decision handed down from on high. We feel passionately that it’s the right thing to do.”

The study concludes that pediatricians are torn between two opposing values: the importance of immunizing infants and the parents’ right to determine what is medically best for their children. Despite their strong — even angry — feelings, pediatricians do not feel it is their place to force the vaccinations on the parents and their children, favoring gentle persuasion or official enforcement over coercion, according to the study.

To build trust, the study suggests that pediatricians communicate to parents that they genuinely respect their rights. But the study also acknowledges pediatricians may simply not be equipped to change parents’ minds on such a complex and personal issue. Communication experts may be necessary, it says, to help physicians combat anti-vaccination sentiment and communicate to parents the benefits of vaccinating their infants.