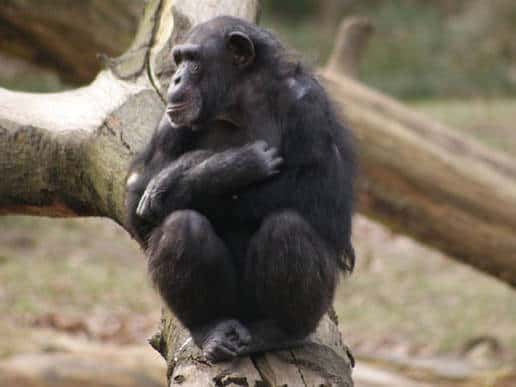 Like humans, many animals have close and stable friendships. However, until now, it has been unclear what makes particular individuals bond. Cognitive Biologists of the University of Vienna, Austria, and the University of Zurich, Switzerland, explored that chimpanzees choose their friends as to be similar in personality. The results of this study appear in the scientific journal “Evolution and Human Behaviour”.

Jorg Massen (University of Vienna) and Sonja Koski (University of Zurich) together measured chimpanzee personality in two zoos with behavioural experiments and years of observations of chimpanzee behaviour. They also carefully logged which chimpanzee sat in body contact with whom most. “This is a clear sign of friendship among chimpanzees”, explains Jorg Massen. Subsequently, the researchers tested, if those chimpanzees who sit together frequently have similar or different personality types.

“We found that, especially among unrelated friends, the most sociable and bold individuals preferred the company of other highly sociable and bold individuals, whereas shy and less sociable ones spent time with other similarly aloof and shy chimpanzees”, says the researcher. The researchers argue that such a strong preference for self-like individuals is probably adaptive, because frequent cooperation becomes more reliable when both partners have similar behavioural tendencies and emotional states.

This finding strongly resembles the known “similarity effect” in humans: We tend to make friends with people who are equally extraverted, friendly and bold as ourselves. “It appears that what draws and keeps both chimpanzee and human friends together is similarity in gregariousness and boldness, suggesting that preference for self-like friends dates back to our last common ancestor”, ends Jorg Massen.