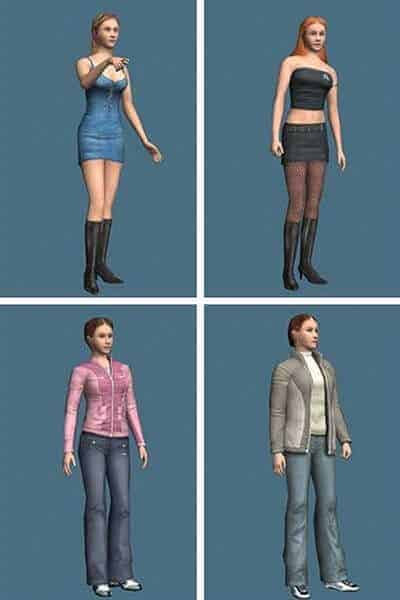 Researchers at Stanford’s Virtual Human Interaction Lab are delving into questions posed by sexualized depictions of women in video games.

Specifically, do female players who use provocatively dressed avatars begin to see themselves more as objects and less as human beings? Jeremy Bailenson, the director of the Virtual Human Interaction Lab at Stanford, has found a way to use virtual reality to answer that question.

This and other issues take on real-world significance as the numbers of female video game players rise despite the industry’s general lack of relatable female characters and as  notoriously violent video games (such as the popular Rockstar Games series, Grand Theft Auto V) continue their rise in popularity.

“We often talk about video game violence and how it affects people who play violent video games,” Bailenson said. “I think it’s equally important to think about sexualization.”

Bailenson is particularly interested in the Proteus Effect: how the experience of acting in a virtual body, known as an avatar, changes people’s behavior in both the virtual and real worlds. For example, when someone wears an avatar that is taller than his actual self, he will act more confidently. People who see the effects of exercise on their bodies in the virtual world will exercise more in the real world.

Bailenson and co-author Jesse Fox published a research paper in the journal Computers in Human Behavior that examined how becoming a sexualized avatar affected women’s perceptions of themselves. Participants donned helmets that blocked out the real world, immersing them in a virtual world of 3-D sight and sound. Motion sensors on their wrists and ankles allowed for the lab’s many infrared cameras to record their motions as they moved identically in both worlds.

Once in the new world, each participant looked in a virtual mirror and saw herself or another woman, dressed provocatively or conservatively. The avatar’s movements in the mirror perfectly copied the participant’s actual physical movements, allowing her to truly feel as if she occupied that body.

The researchers then introduced a male accomplice into the virtual world to talk to the participant. What seemed like a normal, get-to-know-you conversation was actually an assessment of how much the women viewed themselves as objects. Women “wearing” the sexualized avatars bearing their likenesses talked about their bodies, hair and dress more than women in the other avatars, suggesting that they were thinking of themselves more as objects than as people.

After their time in the virtual world, the participants filled out a questionnaire rating how much they agreed with various statements. Bailenson and Fox folded rape myths such as “in the majority of rapes, the victim is promiscuous or has a bad reputation” into the questionnaire. Participants rated how much they agreed or disagreed with the statements.

The Entertainment Software Association estimates that across mobile, PC and console platforms, 45 percent of American gamers are female. But few game titles feature female protagonists. In many popular games in this fast-growing industry, female characters are in the minority; more often than not, they are sexualized.

Many female gamers assert that gaming culture is not welcoming to women. The website notinthekitchenanymore.com collects user-submitted accounts of sexual harassment women experience in online platforms such as Xbox Live. When women critique sexism in games and gamer culture, they are often dismissed or even bullied. Pop-culture critic Anita Sarkeesian faced a barrage of cyber-bullying – including threats of rape and death – for announcing a project examining common tropes of female characters in video games.

Some gamers maintain that virtual worlds and the real world remain mutually exclusive, but the research by Bailenson and Fox suggests differently. “It changes the way you think about yourself online and offline,” Bailenson said. “It used to be passive and you watched the characters. You now enter the media and become the protagonist. You become the characters.”