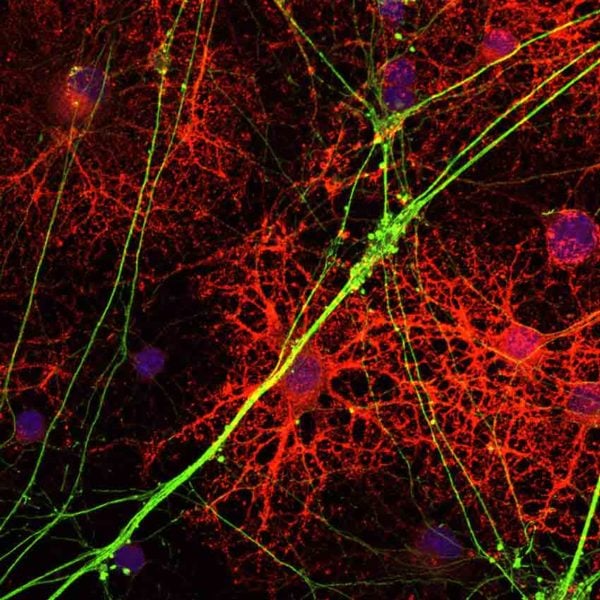 Scientists at The Scripps Research Institute (TSRI) have identified a set of compounds that may be used to treat multiple sclerosis (MS) in a new way.

Unlike existing MS therapies that suppress the immune system, the compounds boost a population of progenitor cells that can in turn repair MS-damaged nerve fibers.

One of the newly identified compounds, a Parkinson’s disease drug called benztropine, was highly effective in treating a standard model of MS in mice, both alone and in combination with existing MS therapies.

“We’re excited about these results, and are now considering how to design an initial clinical trial,” said Luke L. Lairson, an assistant professor of chemistry at TSRI and a senior author of the study, which is reported online in Nature on October 9, 2013.

Lairson cautioned that benztropine is a drug with dose-related adverse side effects, and has yet to be proven effective at a safe dose in human MS patients. “People shouldn’t start using it off-label for MS,” he said.

An autoimmune disease of the brain and spinal cord, MS currently affects more than half a million people in North America and Europe, and more than two million worldwide. Its precise triggers are unknown, but certain infections and a lack of vitamin D are thought to be risk factors. The disease is much more common among those of Northern European heritage, and occurs about twice as often in women as in men.

In MS, immune cells known as T cells infiltrate the upper spinal cord and brain, causing inflammation and ultimately the loss of an insulating coating called myelin on some nerve fibers. As nerve fibers lose this myelin coating, they lose their ability to transmit signals efficiently, and in time may begin to degenerate. The resulting symptoms, which commonly occur in a stop-start, “relapsing-remitting” pattern, may include limb weakness, numbness and tingling, fatigue, vision problems, slurred speech, memory difficulties and depression, among other problems.

Current therapies, such as interferon beta, aim to suppress the immune attack that de-myelinates nerve fibers. But they are only partially effective and are apt to have significant adverse side effects.

In the new study, Lairson and his colleagues decided to try a complementary approach, aimed at restoring a population of progenitor cells of oligodendrocytes. These cells normally keep the myelin sheaths of nerve fibers in good repair and in principle could fix these coatings after MS damages them. But oligodendrocyte numbers decline sharply in MS, due to a still-mysterious problem with the stem-like precursor cells that produce them. “Oligodendrocyte precursor cells (OPCs) are present during progressive phases of MS, but for unknown reasons don’t mature into functional oligodendrocytes,” Lairson said.

Using a sophisticated small-molecule screening laboratory that TSRI manages in conjunction with the California Institute of Regenerative Medicine and in collaboration with the California Institute for Biomedical Research (Calibr), Lairson and his team screened a library of about 100,000 diverse compounds for any that could potently induce OPCs to mature or “differentiate.”

Several compounds scored well as OPC differentiation-inducers. Most were compounds of unknown activity —but one, benztropine, had been well characterized and indeed was already FDA-approved for treating Parkinson’s disease. “That was a surprise, and it meant that we could move forward relatively quickly in testing it,” said graduate student Vishal A. Deshmukh, first author of the paper who performed most of these experiments.

With the help of Brian R. Lawson, a senior author of the paper and assistant professor of immunology at TSRI, and his colleague Research Associate Virginie Tardif, Deshmukh set up tests of benztropine in mice with an induced MS-like autoimmune disease—a model commonly used for testing prospective MS drugs.

In these tests, benztropine showed a powerful ability to prevent autoimmune disease and also was effective in treating it after symptoms had arisen—virtually eliminating the disease’s ability to relapse. Although benztropine on its own worked about as well as existing treatments, it also showed a remarkable ability to complement these existing treatments, in particular two first-line immune-suppressant therapies, interferon-beta and fingolimod.

“Adding even a suboptimal level of benztropine effectively allowed us, for example, to cut the dose of fingolimod by 90%—and achieve the same disease-modifying effect as a normal dose of fingolimod,” said Lawson. “In a clinical setting that dose-lowering could translate into a big reduction in fingolimod’s potentially serious side effects.”

In further analyses, the researchers confirmed that benztropine works against disease in this mouse model by boosting the population of mature oligodendrocytes, which in turn restore the myelin sheaths of damaged nerves—even as the immune attack continues. “The benztropine-treated mice showed no change in the usual signs of inflammation, yet their myelin was mostly intact, suggesting that it was probably being repaired as rapidly as it was being destroyed,” said Lawson.

In addition to setting up initial clinical trials, Lairson and his team hope to learn more about how benztropine induces OPC maturation, and how its molecular structure might be optimized for this purpose. “We’re also looking at some of the other, relatively unknown molecules that we identified in our initial screen, to see if any of those has better clinical potential than benztropine,” he said.

“This work, like our previous studies with hematopoietic and mesenchymal stem cells, illustrates the power of small molecules to control stem and precursor cells in ways that may ultimately lead to a new generation of drugs for regenerative medicine,” said Peter G. Schultz, the Scripps Family Chair Professor in the Department of Chemistry at TSRI and one of the study’s senior authors.

In addition to Lairson, Deshmukh, Lawson, Tardif and Schultz, other contributors to the study, “A Regenerative Approach to the Treatment of Multiple Sclerosis” (doi:10.1038/nature12647), were Costas A. Lyssiotis, Chelsea C. Green, Jonathan G. Swoboda, Insha Ahmad, and Argyrios N. Theofilopoulos of TSRI; Toru Kondo of the University of Hokkaido; and Bilal Kerman, Hyung Joon Kim and Krishnan Padmanabhan from the laboratory of Fred H. Gage at the Salk Institute for Biological Sciences.

The study was funded in part by the Skaggs Institute for Chemical Biology at TSRI and the California Institute for Regenerative Medicine (TR3-05617, TG2-01165).