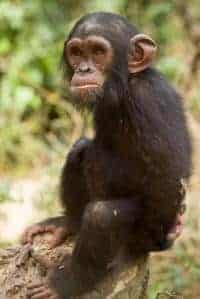 Researchers studying young bonobos in an African sanctuary have discovered striking similarities between the emotional development of the bonobos and that of children, suggesting these great apes regulate their emotions in a human-like way. This is important to human evolutionary history because it shows the socio-emotional framework commonly applied to children works equally well for apes. Using this framework, researchers can test predictions of great ape behavior and, as in the case of this study, confirm humans and apes share many aspects of emotional functioning.

Zanna Clay, PhD, and Frans de Waal, PhD, of the Living Links Center at the Yerkes National Primate Research Center, Emory University, conducted the study at a bonobo sanctuary near Kinshasa, the capital of the Democratic Republic of the Congo. The results are published in the current issue of the Proceedings of the National Academy of Sciences.

Detailed video analysis of daily social life at the sanctuary allowed Clay and de Waal to measure how bonobos handle their own emotions as well as how they react to the emotions of others. They found the two were related in that bonobos that recovered quickly and easily from their own emotional upheavals, such as after losing a fight, showed more empathy for their fellow great apes. Clay notes those bonobos more often gave body comfort (kissing, embracing, touching) to those in distress.

The bonobo (Pan paniscus), one of our closest primate relatives, is as genetically similar to humans as is the chimpanzee. The bonobo is widely considered the most empathic great ape, a conclusion brain research supports. “This makes the species an ideal candidate for psychological comparisons,” says de Waal. “Any fundamental similarity between humans and bonobos probably traces back to their last common ancestor, which lived around six million years ago,” he continues.

If the way bonobos handle their own emotions predicts how they react to those of others, this hints at emotion regulation, such as the ability to temper strong emotions and avoid over-arousal. In children, emotion regulation is crucial for healthy social development. Socially competent children keep the ups and downs of their emotions within bounds. A stable parent-child bond is essential for this, which is why human orphans typically have trouble managing their emotions.

The bonobo sanctuary in this study includes many victims of bushmeat hunting. Human substitute mothers care for the juvenile bonobos that were forcefully removed at an early age from their bonobo mothers. This care continues for years until the bonobos are transferred to a forested enclosure with bonobos of all ages. “Compared to peers reared by their own mothers, the orphans have difficulty managing emotional arousal,” says Clay. She observed how the orphans would take a long time recovering from distress: “They would be very upset, screaming for minutes after a fight compared to mother-reared juveniles, who would snap out of it in seconds.”

“Animal emotions have long been scientifically taboo,” says de Waal, but he stresses how such studies that zoom in on emotions can provide valuable information about humans and our society. “By measuring the expression of distress and arousal in great apes, and how they cope, we were able to confirm that efficient emotion regulation is an essential part of empathy. Empathy allows great apes and humans to absorb the distress of others without getting overly distressed themselves,” continues de Waal. He says this also explains why orphan bonobos, which have experienced trauma that hampers emotional development, are less socially competent than their mother-raised peers.