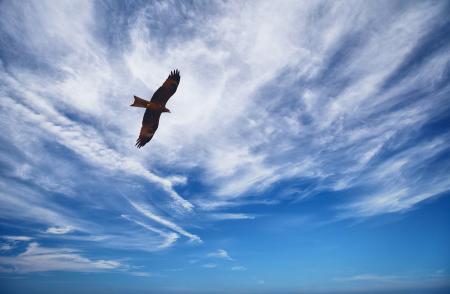 When you’re a tiny mouse in the wild, spotting aerial predators—like hawks and owls—is essential to your survival. But once you see an owl, how is this visual cue processed into a behavior that helps you to avoid an attack? Using an experimental video technique, researchers at the California Institute of Technology (Caltech) have now developed a simple new stimulus with which they can spur the mouse’s escape plans. This new stimulus allows the researchers to narrow down cell types in the retina that could aid in the detection of aerial predators.

“The mouse has recently become a very popular model for the study of vision,” says biology graduate student Melis Yilmaz, who is also first author of the study, which will be published online in the journal Current Biology on October 10. “Our lab and other labs have done a lot of physiological, anatomical, and histological studies in the mouse retina”—a layer of light-sensitive cells in the eye that relay image information to the brain—”but the missing piece was mouse behavior: What do mice do with their vision?”

Yilmaz, under the supervision of Markus Meister, Lawrence A. Hanson, Jr. Professor of Biology, studied the behavior of 40 mice, placed one-by-one in a tiny room called a behavioral arena. After placing each mouse alone in the arena and letting it explore the new environment for a few minutes, Yilmaz played videos of different visual stimuli on a computer monitor mounted on the ceiling, the screen facing down onto the arena. The researchers then watched a video feed of the mouse’s behavior, obtained with a camera located on one of the walls of the arena.

Surprisingly, all of the mice responded to one specific visual stimulus: an expanding black disk, which is meant to imitate the appearance of an approaching aerial predator.

A quarter of the mice responded to the looming disk by completely freezing in place, not moving a muscle or twitching a whisker or tail until the disk disappeared. “When I first saw this behavior, my first thought was that the video recording had stopped,” Yilmaz says.

A far more common reaction to the looming disk—seen in around 75 percent of the mice—was to flee for the cover of a tent-like nest in one corner of the arena.

“For each mouse, this was the very first time that the animal was put into this arena, and it was the very first time that it saw that stimulus, and yet it has this sort of immediate reflex-like response…beginning to flee in less than a quarter of a second,” Meister says. “What’s attractive about this behavior is that it’s incredibly robust, so we can rely on it, and it’s quite specific to this particular visual stimulus. If the same disk was presented on a monitor at the bottom of the arena, the animals don’t respond to that at all. And a looming white disk is also much less effective,” he adds.

Although their study wasn’t designed to evaluate the purpose of the two responses, Yilmaz and Meister suspect that, in the wild, different environmental conditions could lead to different visual behaviors.

“If you were out in nature, maybe freezing is a good reaction to a predatory bird that is very far away because it would allow you to blend into the surroundings,” Meister says. This would confound the bird’s visual system, which uses movement to track targets. Furthermore, he adds, “If the bird is within hearing distance, freezing so completely would help it avoid making a rustling noise.”

The behaviors these researchers observed in this experiment are not uncommon among other animals in the wild, as Meister discovered one evening after giving a presentation about the fleeing and freezing results. “When I came home that evening, my son said, ‘Papi, you won’t believe what happened when we were at the park today. This squirrel was running across a wall, and suddenly it just froze! And then some guy yelled, ‘Hey look!’ and there was a hawk circling around.’ So he had just that day seen it in real life,” Meister says.

Freezing might be the best game plan for an animal trying to avoid predators that are far away, but, Meister says, when the threat is closer “and there is a protective place nearby, then escape might be a better strategy.”

When Yilmaz and Meister began connecting these specific behavioral observations with other information about the mouse visual system, they were able to make predictions about the types of neurons and circuits involved in this rapid response. “We tested four different speeds of the expanding disk video, and we found that only one of those speeds caused this behavior robustly,” Meister says. “That also gives us clues about what types of cells in the retina might be involved, because we know that one type responds to high-speed motion and one type responds to low-speed motions. The cells that detect low-speed motion are probably not involved in this behavior.”

“It’s really striking to me to watch the animal completely ignore one stimulus—like an expanding white disk—whereas they have such a robust reaction to the other type of stimulus,” Yilmaz says. Her next experiments will be focused on manipulating these candidate cell types to pinpoint exactly which types of neurons and circuits are involved in this visual behavior.

In addition to its specific implications for visual behaviors, the work also helps to validate the mouse model for the study of visual processing, Meister says. Mice used in research have been bred for dozens of generations in laboratories—where they never would have seen an aerial predator—and yet the instinctual behavior still exists. “Lab mice never had to learn that a dark object from above was bad news,” he says. “In fact, in our experiments, there was never any kind of punishment or ill effect from a visual display, so they didn’t have any chance to learn the meaning. We believe it’s kind of built into their genetic constitution.”

Although humans don’t have to escape the threat of predatory birds, Meister says that the results from this research could eventually provide information about human visual behaviors. “The mouse and human retinas are really very similar, so many of the circuits that are important for the mouse have analogous circuits in the human retina,” he says. “Humans also react instinctively to approaching objects, but, obviously, we don’t freeze. So, how did nature change a circuit that helps one animal escape from predators so that it serves a different function in another animal?”

This work was published in a paper titled “Rapid Innate Defensive Responses of Mice to Looming Visual Stimuli.” The research was funded by the National Institutes of Health.