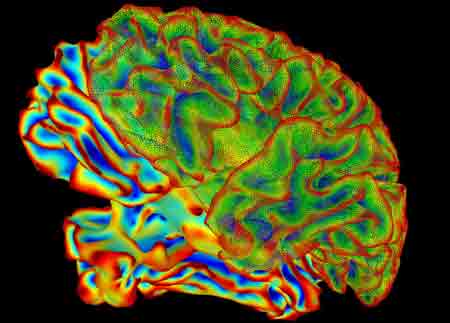 When faced with a choice, the brain retrieves specific traces of memories, rather than a generalized overview of past experiences, from its mental Rolodex, according to new brain-imaging research from The University of Texas at Austin.

Led by Michael Mack, a postdoctoral researcher in the departments of psychology and neuroscience, the study is the first to combine computer simulations with brain-imaging data to compare two different types of decision-making models.

In one model — exemplar — a decision is framed around concrete traces of memories, while in the other model — prototype — the decision is based on a generalized overview of all memories lumped into a specific category.

Whether one model drives decisions more than the other has remained a matter of debate among scientists for more than three decades. But according to the findings, the exemplar model is more consistent with decision-making behavior.

The study was published this month in Current Biology. The authors include Alison Preston, associate professor in the Department of Psychology and the Center for Learning and Memory; and Bradley Love, a professor at University College London.

In the study, 20 respondents were asked to sort various shapes into two categories. During the task their brain activity was observed using functional magnetic resonance imaging (fMRI), allowing researchers to see how the respondents associate shapes with past memories.

According to the findings, behavioral research alone cannot determine whether a subject uses the exemplar or prototype model to make decisions. With brain-imaging analysis, researchers found that the exemplar model accounted for the majority of participants’ decisions. The results show three different regions associated with the exemplar model were activated during the learning task: occipital (visual perception), parietal (sensory) and frontal cortex (attention).

To illustrate, Mack says: Imagine having a conversation with a friend about buying a new car. When you think of the category “car,” you’re likely to think of an abstract concept of a car, but not specific details. However, abstract categories are composed of memories from individual experiences. So when you imagine “car,” the abstract mental picture is actually derived from experiences, such as your friend’s white sedan or the red sports car you saw on the morning commute.

Mack says this new approach to model-based cognitive neuroscience could lead to discoveries in cognitive research.

“The field has struggled with linking theories of how we behave and act to the activation measures we see in the brain,” Mack says. “Our work offers a method to move beyond simply looking at blobs of brain activation. Instead, we use patterns of brain activation to decode the algorithms underlying cognitive behaviors like decision making.”