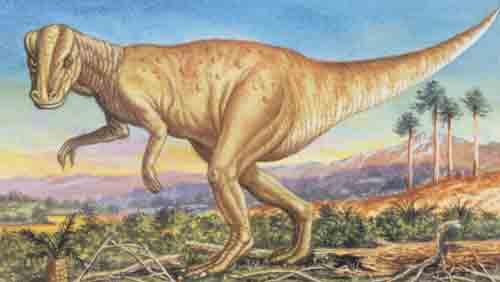 Researchers at The Field Museum, the North Carolina Museum of Natural Sciences (NCMNS), and North Carolina State University (NCSU) have discovered a new, giant predatory dinosaur that walked the Earth approximately 100 million years ago, in the Cedar Mountain Formation in Utah.

The new dinosaur is the first of its kind to be discovered in North America. The study appears in the Nov. 22, 2013 issue of Nature Communications.

The new predator, which was over 30 feet long and weighed more than four tons, was doubtless the top predator in its ecosystem.

“This dinosaur was a colossal predator second only to the great T. rex and perhaps Acrocanthosarus in the North American fossil record,” says Lindsay Zanno, lead author on the paper and Director of Paleontology at NCMNS/NCSU.

Scientists have named the dinosaur Siats meekerorum, in reference to a cannibalistic monster from the mythology of the Ute Native American people, and in acknowledgement of the Meeker family for their support for early career paleontologists at The Field Museum.

Siats meekerorum was discovered in 2008 by Zanno as part of a Field Museum expedition to 100-million-year-old rocks of the Cedar Mountain Formation in Utah. The scattered remains of this animal were retrieved from a giant excavation over two summers, and then painstakingly cleaned from rock by staff and volunteers at The Field Museum.

Despite its large size, Siats is not a close relative of T. rex and other tyrannosaurs that were the dominant predators in North America for the last 20 million years of the age of dinosaurs. Rather, it belongs to the carchardontosaurian group of theropods (predatory dinosaurs), whose more famous members include giants like the Argentinean Giganotosaurus. Siats belongs to a branch of the carcharodontosaurian family tree that was previously unknown in North America.

“We were thrilled to discover the first dinosaur of its kind in North America and add to mounting evidence that dinosaurs were widely dispersed across the globe 100 million years ago” says study co-author and Curator of Dinosaurs at the Field Museum, Peter Makovicky.

Siats comes from the middle of a 30-million-year gap in the fossil record of North American large predatory dinosaurs, during which the top predator role changed hands from carcharodontodsaurians in the Early Cretaceous to tyrannosaurs in the Late Cretaceous.

The lack of fossils left paleontologists unsure about when this change happened and if tyrannosaurus outcompeted carcharodontosaurs, or assumed that niche following carcharodontosaur extinction. The upper Cedar Mountain Formation is currently one of the only rock units known to produce fossils of both groups.

Teeth of tyrannosaurs from the Cedar Mountain Formation indicate that the tyrannosaurs living alongside Siats were much smaller in stature and did not compete for the apex predator role.

“The huge size difference certainly suggests that tyrannosaurs were held in check by carcharodontosaurs, and only evolved into enormous apex predators after the carcharodontosaurs disappeared,” said Makovicky.

Zanno added, “Finding Siats in the 30-million-year predator gap tells us carcharodontosaurians reigned supreme in North America for much longer than anyone had expected.”

Until recently, it was thought that continental rifting in the Cretaceous caused isolation between dinosaur faunas on different continents, and the early-to- middle Cretaceous faunas of North America were particularly isolated. That picture is rapidly changing through discoveries such as Siats.

“Siats is just the tip of the iceberg; our teams are unearthing a lost dinosaurian ecosystem right here in the badlands of western North America,” Zanno said.

“Since Siats, we have made more exciting discoveries, including two new species of dinosaur, which will further illuminate how North American Cretaceous dinosaurs are related to those on other continents,” said Makovicky.