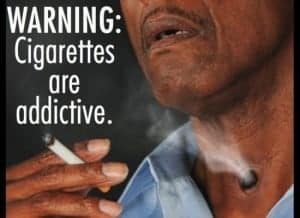 A research paper published in the scientific journal Tobacco Control, “Cigarette graphic warning labels and smoking prevalence in Canada: a critical examination and reformulation of the FDA regulatory impact analysis”, shows that graphic warning labels on cigarette packs led to a decrease in smoking rates in Canada of between 12% and 20% from 2000 to 2009. The authors estimate that if the same model was applied to the United States, the introduction of graphic warnings would potentially lead to a decrease of between 5.3 and 8.6 million smokers.

In 2011 the US Food and Drug Administration (FDA) estimated the impact of graphic warning labels on U.S. smoking rates, based on Canada’s experience. This analysis was a key factor in an August 2012 decision by the U.S. Court of Appeals for the D.C. Circuit that found that the FDA’s analysis “essentially concedes the agency lacks any evidence that the graphic warnings are likely to reduce smoking rates.”

The authors of this new scientific paper – led by Jidong Huang and Frank J. Chaloupka of the University of Illinois at Chicago and Geoffrey T. Fong of the University of Waterloo and the Ontario Institute for Cancer Research in Canada – assert that the model used by the FDA significantly under-estimated the actual impact of graphic warning labels. Using statistical methods to compare smoking rates in Canada nine years before and nine years after the introduction of graphic warnings, researchers found that:

This new analysis indicates that the potential reduction in smoking rates is 33-53 times larger than that estimated in the FDA’s model and proves the effectiveness of health warnings that include graphic pictures.

Dr. Huang, the lead author of the paper, stated, “These findings are important for the ongoing initiative to introduce graphic warnings in the United States. The original proposal by the U.S. Food and Drug Administration (FDA) was successfully challenged by the tobacco industry, and the court cited the very low estimated impact on smoking rates as a factor in its judgment. Our analyses corrected for errors in the FDA’s analysis, concluding that the effect of graphic warnings on smoking rates would be much stronger than the FDA found. Our results provide much stronger support for the FDA’s revised proposal for graphic warnings, which we hope will be forthcoming in the near future.”

Article 11 of the WHO Framework Convention on Tobacco Control (WHO FCTC) requires Parties to the FCTC to implement large, rotating health warnings. Canada is one of 177 countries, covering nearly 90% of the world’s population, which are parties to the FCTC. While Canada has introduced graphic warnings, many other countries have not done so.

Melodie Tilson, Policy Director of the Non-Smokers’ Rights Association, said: “Canada was the first country to introduce pictorial warnings, and many other countries have since been inspired to use this powerful method of communicating the harms of cigarettes and other tobacco products. Although the revision of the warnings in 2012 was an important step in bolstering the impact of the warnings, it is important to continue efforts to reduce the use of a product that is by far the leading cause of disease and death in Canada. A critical initiative is for Canada to follow Australia’s lead and adopt plain and standardized tobacco packaging. Such a law would eliminate the branding on tobacco packaging and standardize the size and shape, which the tobacco industry has used effectively to promote their products, especially to youth. Evidence shows that plain packaging both reduces the appeal of tobacco products and increases the effectiveness of health warnings.”

Dr. Judith Mackay, Senior Advisor at the World Lung Foundation, and a tobacco control leader in Asia and throughout the world, commented: “These new research findings show clearly the value of graphic warnings for countries all over the world, especially low- and middle-income countries, where knowledge about the health harms and awareness of the addictiveness of cigarettes and other tobacco products is lower than it is in high-income countries. It is even clearer now that large graphic warnings that are placed on both the front and the back of the pack constitute a very low cost and very high impact policy for reducing tobacco use.”

Professor Fong, co-author of the paper and the Principal Investigator of the International Tobacco Control Policy Evaluation Project (the ITC Project), which provided the data on cigarette prices for the study, stated: “This study adds to the strong and growing number of studies showing the powerful and positive impact of graphic warnings on reducing smoking rates. Over 60 countries have already either introduced graphic warnings or have passed legislation to do so, but in many countries the warnings have been delayed—sometimes for years—before they have been introduced. Our results provide strong evidence showing the public health benefits of large graphic warnings and we hope that this will help to support initiatives to implement more effective health warnings throughout the world. Using graphic warnings to inform smokers and non-smokers alike about the harms of tobacco is a sensible and proven method for increasing knowledge, changing attitudes, motivating smokers to quit, and discouraging youth from initiating smoking.”

Why Canada was used as a benchmark for the US

The US FDA and the researchers for this study used Canada as a benchmark because: