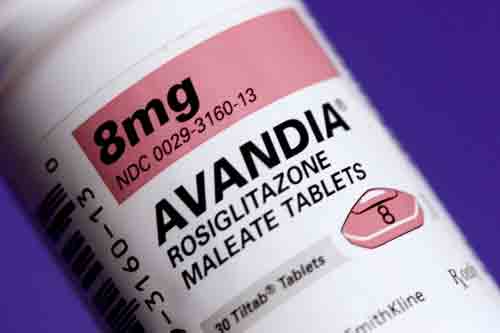 The U.S. Food and Drug Administration today announced it is requiring the removal of certain restrictions on prescribing and use of the diabetes drug Avandia (rosiglitazone) to reflect new information regarding the cardiovascular risk of the medicine. Today’s actions are consistent with the recommendations of expert advisory committees.

Results from the Rosiglitazone Evaluated for Cardiovascular Outcomes and Regulation of Glycemia in Diabetes (RECORD) clinical trial showed no elevated risk of heart attack or death in patients being treated with Avandia when compared to standard-of-care diabetes drugs. These data do not confirm the signal of increased risk of heart attacks that was found in a meta-analysis of clinical trials first reported in 2007.

“Our actions today reflect the most current scientific knowledge about the risks and benefits of this drug,” said Janet Woodcock, M.D., director of the FDA’s Center for Drug Evaluation and Research. “Given these new results, our level of concern is considerably reduced; thus, we are requiring the removal of certain prescribing restrictions.”

The FDA’s actions include requiring modifications to labeling about cardiovascular safety, requiring changes to the Risk Evaluation and Mitigation Strategy (REMS) program, and releasing a postmarket study requirement.

Once the changes are final, rosiglitazone’s indication for use will no longer be limited to certain patients. The FDA anticipates that the new indication will state that the drug may be used along with diet and exercise to improve control of blood sugar in patients with type 2 diabetes mellitus, an indication similar to other diabetes drugs currently available.

The manufacturers of rosiglitazone drugs will be required to ensure that health care providers who are likely to prescribe rosiglitazone-containing medicines are provided training based on the current state of knowledge concerning the cardiovascular risk of these medicines.

The FDA is also releasing GlaxoSmithKline (GSK) from the postmarket requirement to conduct a clinical trial, known as Thiazolidinedione Intervention with Vitamin D Evaluation (TIDE), comparing Avandia to Actos (pioglitazone), the only other approved drug in the thiazolidinedione class, and to standard diabetes drugs. The FDA has concluded that this trial is no longer necessary or feasible.

In 2010, in response to data from a meta-analysis of placebo-controlled randomized trials that suggested an elevated risk of cardiovascular events in association with rosiglitazone use, the FDA announced it would restrict the drug to use in patients with type 2 diabetes who could not control their diabetes on other medications. The FDA also required GSK to convene an independent group of scientists to readjudicate key aspects of RECORD, which studied the cardiovascular safety of Avandia compared to standard diabetes drugs to provide clarity about the integrity of the study findings.

On June 5 and 6, 2013, the readjudicated results of RECORD, which were consistent with the original findings of the trial, were discussed at a joint meeting of the Endocrinologic and Metabolic Drugs Advisory Committee and the Drug Safety and Risk Management Advisory Committee. Committee members generally agreed that the readjudication was well conducted and provided reassurance that the original study findings were accurate. A majority of the committee members voted to recommend that the REMS for rosiglitazone be eliminated or modified to lessen restrictions to use.