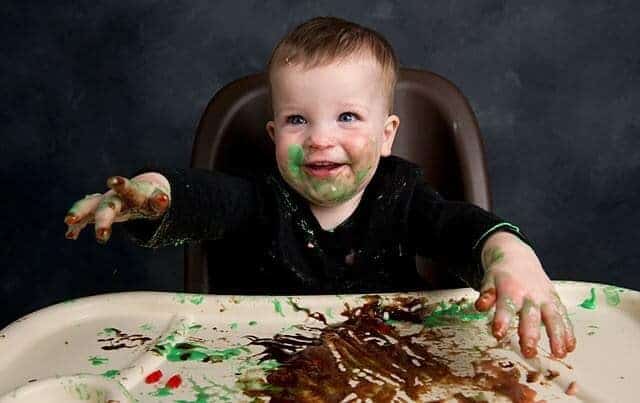 Attention, parents: The messier your child gets while playing with food in the high chair, the more he or she is learning.

Researchers at the University of Iowa studied how 16-month-old children learn words for nonsolid objects, from oatmeal to glue. Previous research has shown that toddlers learn more readily about solid objects because they can easily identify them due to their unchanging size and shape. But oozy, gooey, runny stuff? Not so much.

New research shows that changes if you put toddlers in a setting they know well. In those instances, word learning increases, because children at that age are “used to seeing nonsolid things in this context, when they’re eating,” says Larissa Samuelson, associate professor in psychology at the UI who has worked for years on how children learn to associate words with objects. “And, if you expose them to these things when they’re in a highchair, they do better. They’re familiar with the setting and that helps them remember and use what they already know about nonsolids.”

In a paper published in the journal Developmental Science, Samuelson and her team at the UI tested their idea by exposing 16-month-olds to 14 nonsolid objects, mostly food and drinks such as applesauce, pudding, juice, and soup. They presented the items and gave them made-up words, such as “dax” or “kiv.” A minute later, they asked the children to identify the same food in different sizes or shapes. The task required the youngsters to go beyond relying simply on shape and size and to explore what the substances were made of to make the correct identification and word choice.

Not surprisingly, many children gleefully dove into this task by poking, prodding, touching, feeling, eating—and yes, throwing—the nonsolids in order to understand what they were and make the correct association with the hypothetical names. The toddlers who interacted the most with the foods—parents, interpret as you want—were more likely to correctly identify them by their texture and name them, the study determined. For example, imagine you were a 16-month-old gazing at a cup of milk and a cup of glue. How would you tell the difference by simply looking?

“It’s the material that makes many nonsolids,” Samuelson notes, “and how children name them.”

The setting matters, too, it seems. Children in a high chair were more apt to identify and name the food than those in other venues, such as seated at a table, the researchers found.

“It turns out that being in a high chair makes it more likely you’ll get messy, because kids know they can get messy there,” says Samuelson, the senior author on the paper.

The authors say the exercise shows how children’s behavior, environment (or setting), and exploration help them acquire an early vocabulary—learning that is linked to better later cognitive development and functioning.

“It may look like your child is playing in the high chair, throwing things on the ground, and they may be doing that, but they are getting information out of (those actions),” Samuelson contends. “And, it turns out, they can use that information later. That’s what the high chair did. Playing with these foods there actually helped these children in the lab, and they learned the names better.”

“It’s not about words you know, but words you’re going to learn,” Samuelson adds.

Lynn Perry, who helped design the study and analyze the data as part of her doctoral studies at the UI, is the first author on the paper. Johanna Burdinie, who was an UI undergraduate during the project, is a contributing author.

The National Institutes of Health (grant number: R01 HD045713) funded the research. Burdinie was funded by a fellowship from the Iowa Center for Research for Undergraduates.