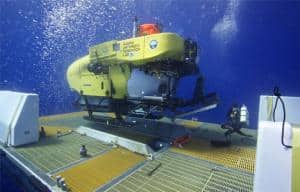 A World War II-era Imperial Japanese Navy mega-submarine, the I-400, lost since 1946 when it was intentionally scuttled by U.S. forces after its capture, has been discovered in more than 2,300 feet of water off the southwest coast of O‘ahu.  The discovery resolves a decades-old Cold War mystery of just where the lost submarine lay, and recalls a different era as one war ended and a new, undeclared conflict emerged.

Longer than a football field at 400 feet, the I-400 was known as a “Sen-Toku” class submarine—the largest submarine ever built until the introduction of nuclear-powered subs in the 1960s.  With a range of 37,500 miles, the I-400 and its sister ship, the I-401, were able to travel one and a half times around the world without refueling, a capability that, to this day, has never been matched by any other diesel-electric submarine.

The new discovery of the I-400 was led by veteran undersea explorer Terry Kerby, Hawaiʻi Undersea Research Laboratory (HURL) operations director and chief submarine pilot.  Since 1992, HURL has used its manned submersibles Pisces IV and Pisces V to hunt for submarines and other submerged cultural resources as part of the National Oceanic and Atmospheric Administration’s (NOAA) maritime heritage research effort.

Heritage properties like historic wreck sites are non-renewable resources possessing unique information about the past.  This discovery was part of a series of dives funded by a grant from NOAA’s Office of Exploration and Research and the University of Hawai‘i at Mānoa’s School of Ocean and Earth Science and Technology (SOEST).  Working with Steven Price of HURL, Kerby has researched the subject of lost submarines off O‘ahu for decades. On these recent dives, Kerby was joined by two NOAA archaeologists with experience in documenting World War II vessels and submarines, Drs. James Delgado and Hans Van Tilburg.

“The I-400 has been on our ‘to-find’ list for some time.  It was the first of its kind of only three built, so it is a unique and very historic submarine,” said Kerby.  “Finding it where we did was totally unexpected.  All our research pointed to it being further out to sea.  The multi-beam anomalies that appear on a bottom survey chart can be anything from wrecks to rocks—you don’t know until you go there.  Jim and Hans and I knew we were approaching what looked like a large wreck on our sonar.  It was a thrill when the view of a giant submarine appeared out of the darkness.”

The I-400 and the I-401 aircraft-carrying submarines held up to three folding-wing float-plane bombers that could be launched by catapult just minutes after the submarines surfaced.  Each aircraft could carry a powerful 1,800-pound bomb to attack the U.S. mainland.  But neither was ever used for its designed purpose, their missions curtailed by the end of armed conflict in the Pacific.

“The innovation of air strike capability from long-range submarines represented a tactical change in submarine doctrine,” said Delgado, director of NOAA’s Maritime Heritage Program, within the Office of National Marine Sanctuaries, Washington, D.C. “The large I-400, with its extended range and ability to launch three M6A1 Seiran strike aircraft, was clearly an important step in the evolution of submarine design.”

Up until the Sen-Toku’s day, submarines had been almost exclusively dedicated to sinking surface ships (and other submarines) by stealth attack from under water.

“The I-400 is technologically significant due to the design features associated with its large watertight hangar,” Delgado said.  “Following World War II, submarine experimentation and design changes would continue in this direction, eventually leading to ballistic missile launching capabilities for U.S. submarines at the advent of the nuclear era.”

At the end of WWII, the U.S. Navy captured five Japanese subs, including the I-400, and brought them to Pearl Harbor for inspection. When the Soviet Union demanded access to the submarines in 1946 under the terms of the treaty that ended the war, the U.S. Navy sank the subs off the coast of Oʻahu and claimed to have no information on their precise location.  The goal was to keep their advanced technology out of Soviet hands during the opening chapters of the Cold War.  HURL has now successfully located four of these five lost submarines.

The HURL crew identified the wreck site by carefully combing through side-scan sonar and multi-beam sonar data to identify anomalies on a deep sea floor littered with rocky outcrops and other debris.  The wreck was positively identified as the I-400 based on features including its aircraft launch ramp, deck crane, torpedo tube configuration, and stern running lights.  The remains of the submarine’s aircraft hangar and conning tower appear to have been separated from the wreck, perhaps in the blunt trauma of the three U.S. Navy torpedo blasts that sunk the ship in 1946.

The I-400 was discovered in August 2013 and is being announced today after NOAA has reviewed its findings with the U.S. state department and Japanese government officials.

“These historic properties in the Hawaiian Islands recall the critical events and sacrifices of World War II in the Pacific, a period which greatly affected both Japan and the United States and shaped the Pacific region as we now know it,” said Van Tilburg, maritime heritage coordinator for NOAA in the Pacific Islands region.  “Our ability to interpret these unique weapons of the past and jointly understand our shared history is a mark of our progress from animosity to reconciliation.  That is the most important lesson that the site of the I-400 can provide today.”

The Hawai‘i Undersea Research Laboratory (HURL) specializes in providing scientists with the tools and expertise they need to investigate the undersea environment, including submersibles, remotely operated vehicles, and other cutting edge technologies. This Center, within the School of Ocean and Earth Sciences and Technology (SOEST) at the University of Hawai‘i, is partly funded through a cooperative agreement from NOAA that began in 1980. The Center is now part of NOAA’s Office of Ocean Exploration and Research.