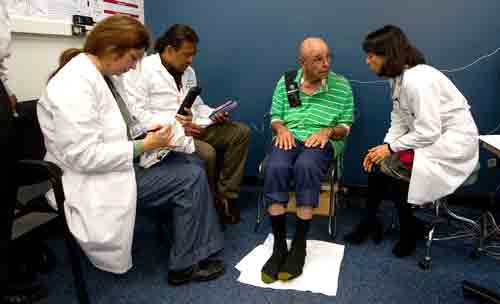 Stanford University School of Medicine investigators have successfully implanted and recorded data from a device that not only generates electrical impulses to tame symptoms of Parkinson’s disease, but also continuously monitors and records brain activity in a key affected structure deep within the patient’s brain.

This second-generation version of an existing deep-brain-stimulation, or DBS, device will allow neuroscientists to noninvasively capture vast amounts of information about the patient’s brain-firing patterns to discern the “neural signatures” characterizing that patient’s symptoms, gain insights about the progression of the disease, and ultimately, it is hoped, develop algorithms for automating the device’s signaling program so that it adjusts in response to changes in brain activity.

“We have high hopes that discoveries made possible by this new DBS system will fuel the development of new, personalized treatments for a range of neurological disorders,” said Helen Bronte-Stewart, MD, professor of neurology and neurological sciences at the medical school and director of the Comprehensive Movement Disorders Center at Stanford Hospital & Clinics, who is leading the effort. “With this ‘brain radio,’ we can study the brain’s signaling patterns at the same time that we’re observing a patient’s precise movements — whether intended or not — with the goal of understanding just which brain rhythms correspond to which specific patterns of movement.”

In the past, brain-activity data has been downloaded from Parkinson’s patients while they’re lying still on an operating table, but such data reflected only brain activity while the patients were at rest.

On Oct. 30, a surgical team led by Jaimie Henderson, MD, professor of neurosurgery at the medical school who treats patients at Stanford Hospital & Clinics, implanted a device called a neurostimulator under the collarbone of Parkinson’s disease patient Frank Donobedian and hooked it up to two fine, insulated electrical filaments, or leads, in Donobedian’s brain. In a surgical procedure a week earlier, the team had threaded the leads into the patient’s brain so that they impinged on twin structures, one on each side of the brain, called the subthalamic nucleus. The subthalamic nucleus has been tied to symptoms of Parkinson’s disease such as tremor, difficulty in initiating movement and a tendency to “freeze” in place mid-motion.

The neurostimulator is analogous to a pacemaker in cardiology; it transmits signals — at frequencies, amplitudes and durations programmed by a neurologist — to the leads, which then fire electrical impulses that counteract the aberrant brain signals producing the physical symptoms. Over time, the neurostimulator’s impulse-transmission pattern is optimized via a trial-and-error process involving extensive patient-neurologist interaction.

What made the Oct. 30 procedure unique wasn’t the surgery itself but rather the nature of the neurostimulator, the first of its type ever implanted in the United States. This new neurostimulator not only transmits signals to the subthalamic nucleus but can sense and store the subthalamic nucleus’ electrical output. (In August, a Parkinson’s patient in Germany received such a next-generation DBS device.) Both the currently marketed and new DBS devices are manufactured by Medtronic Inc.

There is no evidence that DBS slows the progression of the underlying brain pathology of Parkinson’s disease, although it typically lets patients lower their medication dosages, which can alleviate side effects. (More than 100,000 first-generation DBS devices have been implanted worldwide — more than 600 of them by Henderson, in fact — with substantial overall success in providing relief from not only the symptoms of Parkinson’s disease, but also those of epilepsy, chronic pain and more.)

On Nov. 20, Donobedian, a 72-year-old retired schoolteacher from Seaside, Calif., came to Stanford for an appointment with Bronte-Stewart, who regularly sees patients a few weeks after their DBS devices have been implanted. Donobedian had deliberately skipped his routine Parkinson’s medications so Bronte-Stewart, who is also the John E. Cahill Family Professor, could more easily observe his symptoms and watch how they responded to different DBS frequencies and intensities. But in addition, the doctor and patient were embarking on the first of a series of groundbreaking sessions during which Bronte-Stewart would download data from Donobedian’s implanted device via a telemetric receiver and attempt to correlate his symptoms with his brain activity.

She hopes to identify the neural signatures of not only the resting state, but also of voluntary movement and task performance, as well as of the tremor itself, and to see directly how those neural signatures change in response to manipulations of DBS frequency and voltage output.

“For the past decade, we’ve been measuring our patients’ motor control by observing their tremor and voluntary movement, tweaking the amplitude or frequency of their DBS device, seeing whether that seems to improve their symptoms, and telling them to come back in three months and report on how things have been going,” she said. “Now, we can access our patient’s brain signals by waving a telemetric ‘wand’ over his chest while he sits, walks, speaks or performs a task. We can even retrieve brain data the device picked up earlier — say when the patient was at home sleeping. And we can begin to figure out which brain rhythms correspond to his movement-disorder symptoms.”

In the long term, Bronte-Stewart envisages a future DBS device along the lines of an ultrasophisticated, multiparameter thermostat, constantly adapting the frequency and voltage of its pulses to the patient’s need at any particular time — for instance, walking versus talking versus sleeping.

Henderson, the neurosurgeon, said the device “will give us a unique window on brain function and dysfunction in Parkinson’s disease that we haven’t been able to obtain in any other way.”

For his part, Donobedian, who was initially referred to the DBS team by specialist Camilla Kilbane, MD, clinical assistant professor of neurology and neurological sciences, said he hasn’t taken a painkiller since his DBS device was installed.

The study is funded by the Helen M. Cahill Research Award, The Robert and Ruth Halperin Foundation and the John A. Blume Foundation. Stanford will receive 10 of the new “two-way” DBS devices (but no other funding of any kind) from Medtronic, and is recruiting Parkinson’s patients who, while they may not benefit directly from the ongoing study, wish to make a difference in how this disease’s symptoms are treated in the future.

Information about Stanford’s Department of Neurology and Neurological Sciences, which is also supporting this work, is available at http://neurology.stanford.edu/.