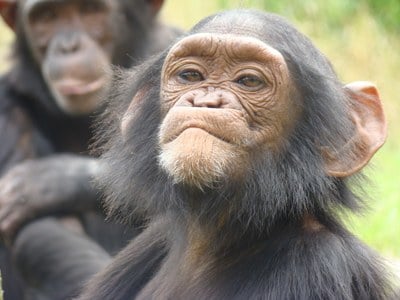 Chimpanzees are known for their curious nature. They show a rich palette of learning behaviour, both individually and socially.

But they are also rather hesitant to abandon their personal preferences, even when that familiar behaviour becomes extremely ineffective. Under which circumstances would chimpanzees flexibly adjust their behaviour? Edwin van Leeuwen and colleagues from the MPI’s for Psycholinguistics and Evolutionary Anthropology conducted a series of experiments in Germany and Zambia to answer this question.

The researchers studied 16 captive chimpanzees at the Wolfgang Kohler Primate Research Center in Germany (Leipzig) and 12 semi-wild chimpanzees at the Chimfunshi Wildlife Orphanage Trust, a sanctuary that houses more than a hundred chimpanzees under nearly natural conditions in the north-western part of Zambia. Chimpanzees were trained on two different vending machines. A minority of the group was made familiar with one machine and the majority of group members with the other machine. Wooden balls were thrown into their enclosure; the chimpanzees could insert these balls into the machines to receive one peanut for each ball.

The researchers emphasise that these results may be dependent upon the specific trade-offs that were created by the experimental design and that chimpanzees could act differently under the pressures of life in the wild. Van Leeuwen: “Conformity could still be a process guiding chimpanzees’ behaviour. Chimpanzee females, for instance, disperse to other groups in the wild. For these females, it is of vital importance to integrate into the new group. Conformity to local (foraging) customs might help them to achieve this integration.”

Link to the publication