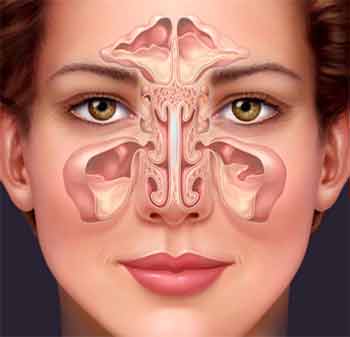 Saint Louis University researchers have analyzed the microbiomes of people with chronic rhinosinusitis and healthy volunteers and found evidence that some chronic sinus issues may be the result of inflammation triggered by an immune response to otherwise harmless microorganisms in the sinus membranes.

The findings, recently published in JAMA Otolaryngology – Head & Neck Surgery, support mounting evidence that inflammation may be the cause of most chronic rhinosinusitis (CRS) instead of bacterial infection.

Study author Rajeev Aurora, Ph.D., professor of molecular microbiology and immunology at Saint Louis University, says that the paper sheds new light on the spectra of microorganisms that live in our bodies and our own immune response to those organisms.

Chronic rhinosinusitis, the inflammation of the sinus and nasal passages lasting more than three months, is one of the most common chronic conditions in the U.S.

The condition can be challenging for doctors to treat because the underlying mechanisms causing the condition are not well understood. While antibiotics can help some patients, others are not helped by drugs or more invasive treatments, such as surgery to open up sinuses. Doctors have proposed any number of causes, included allergy, immune deficiency, cystic fibrosis, gastroesophageal reflux, and structural abnormalities, but questions remain about the origin of the condition.

As scientists are learning more about the body’s microbiome, the specific colonies of microorganisms like bacteria that live in various places in the body, including the mouth, the intestinal tract, and skin, they are becoming aware that the clusters of microbiota can be remarkably different from each other from place to place in the same person, as well as from the microbiota of other people.

Aurora and his research team decided to study the microorganisms that live in the sinus membrane to learn more about their role in CRS. Their initial hypothesis was a simple one: using newly available sequencing techniques, they would compare the bacteria and other microbiota in the sinuses of healthy people and those with CRS, and, if they could pinpoint specific bacteria in those with CRS, they would have their culprit.

In order to access the sinus membrane, Aurora collaborated with assistant professor of otolaryngology at SLU Thomas Sanford, M.D. to collect samples from patients who were undergoing surgery. Thirty patients had chronic rhinosinusitus and 12 were healthy controls, undergoing surgery for other reasons.

“It turned out that the CRS and control groups were very similar, and the differences were not of the type that that would cause disease,” Aurora said. “It did not appear that a particular microorganism was acting as a pathogen.

“So, we turned to look at the immune system.”

And, indeed, Aurora and his team found that the immune system of those with CRS was activated by the microbiota of healthy individuals.

Further study findings suggested that bacteria and fungi are not causing an infection in the sinuses, but rather, that the immune system was responding to commensals, microorganisms that, themselves, do not harm the human body. When the immune system reacts in a hyper-responsive way, unnecessarily fighting off a harmless microorganism, it can initiate an immune response like inflammation. The body can then get locked into a cycle where inflammation generates more inflammation, causing a chronic condition.

“Patients with CRS are hyper-responsive to normal microbiota,” said Aurora. “Our take-home message is that the problem doesn’t lie in the microbiota. The inflammatory response and the resulting damage from the prolonged inflammation are caused by the body’s own immune response to harmless microbiota.”

For future studies, Aurora is left with another important question to answer. If the immune system is activated in response to commensals, why are only nasal and sinus microbiota and not those in the gut or skin involved?

There is no evidence, for example, that people with CRS also have colitis, another inflammatory condition. It appears that there is some specificity to the reaction to the microbiota in the nasal passages, and future research will explore why the inflammatory reaction appears to be so localized.

1 thought on “Chronic stuffy nose? Could be your microbiome”