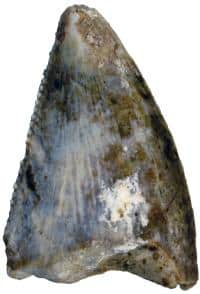 Dinosaur fossils are exceptionally rare in the Arabian Peninsula. An international team of scientists from Uppsala University, Museum Victoria, Monash University, and the Saudi Geological Survey have now uncovered the first record of dinosaurs from Saudi Arabia.

What is now dry desert was once a beach littered with the bones and teeth of ancient marine reptiles and dinosaurs.

A string of vertebrae from the tail of a huge “Brontosaurus-like” sauropod, together with some shed teeth from a carnivorous theropod represent the first formally identified dinosaur fossils from Saudi Arabia, and were found in the north-western part of the Kingdom along the coast of the Red Sea.

The remains were discovered during excavations conducted by a team of scientists working under the auspices of the Saudi Geological Survey, Jeddah.

The dinosaur finds were recently published in the scientific journal PLOS ONE and jointly authored by participating researchers from Sweden, Australia and Saudi Arabia.

“Dinosaur fossils are exceptionally rare in the Arabian Peninsula, with only a handful of highly fragmented bones documented this far” says Dr Benjamin Kear, based at Uppsala University in Sweden and lead author of the study.

“This discovery is important not only because of where the remains were found, but also because of the fact that we can actually identify them. Indeed, these are the first taxonomically recognizable dinosaurs reported from the Arabian Peninsula” Dr Kear continues.

“Dinosaur remains from the Arabian Peninsula and the area east of the Mediterranean Sea are exceedingly rare because sedimentary rocks deposited in streams and rivers during the Age of Dinosaurs are rare, particularly in Saudi Arabia itself” says Dr Tom Rich from Museum Victoria in Australia.

When these dinosaurs were alive, the Arabian landmass was largely underwater and formed the north-western coastal margin of the African continent.

“The hardest fossil to find is the first one. Knowing that they occur in a particular area and the circumstances under which they do, makes finding more fossils significantly less difficult” says Dr Rich.

The teeth and bones are approximately 72 million years old.

Two types of dinosaur were described from the assemblage, a bipedal meat-eating abelisaurid distantly related to Tyrannosaurus but only about six metres long, and a plant-eating titanosaur perhaps up to 20 metres in length.

Similar dinosaurs have been found in North Africa, Madagascar and as far away as South America.

Adapted from a news release issued by Uppsala University