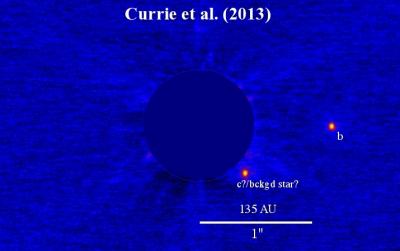 An object discovered by astrophysicists at the University of Toronto (U of T) nearly 500 light years away from the Sun may challenge traditional understandings about how planets and stars form.

The object is located near and likely orbiting a very young star about 440 light years away from the Sun, and is leading astrophysicists to believe that there is not an easy-to-define line between what is and is not a planet.

“We have very detailed measurements of this object spanning seven years, even a spectrum revealing its gravity, temperature, and molecular composition. Still, we can’t yet determine whether it is a planet or a failed star – what we call a ‘brown dwarf’. Depending on what measurement you consider, the answer could be either,” said Thayne Currie, a post-doctoral fellow in U of T’s Department of Astronomy & Astrophysics and lead author of a report on the discovery published this week in Astrophysical Journal Letters.

Named ROXs 42Bb for it’s proximity to the star ROXs 42B, the object is approximately nine times the mass of Jupiter, below the limit most astronomers use to separate planets from brown dwarfs, which are more massive. However, it is located 30 times further away from the star than Jupiter is from the Sun.

Most astronomers believe that gas giant planets like Jupiter and Saturn formed by core accretion, whereby the planets form from a solid core that then accretes a massive gaseous envelope. Core accretion operates most efficiently closer to the parent star due to the length of time required to first form the core.

An alternate theory proposed for forming gas giant planets is disk instability – a process by which a fragment of a disk gas surrounding a young star directly collapses under its own gravity into a planet. This mechanism works best farther away from the parent star.

Of the dozen or so other young objects with masses of planets observed by Currie and other astronomers, some have planet-to-star mass ratios less than about 10 times that Jupiter and are located within about 15 times Jupiter’s separation from the Sun. Others have much higher mass ratios and/or are located more than 50 times Jupiter’s orbital separation, properties that are similar to much more massive objects widely accepted to not be planets. The first group would be planets formed by core accretion, and the second group probably formed just like stars and brown dwarfs. In between these two populations is a big gap separating true planets from other objects.

Currie says that the new object starts to blur this distinction between planets and brown dwarfs, and may lie within and begin to fill the gap. “It’s very hard to understand how this object formed like Jupiter did. However, it’s also too low mass to be a typical brown dwarf; disk instability might just work at its distance from the star. It may represent a new class of planets or it may just be a very rare, very low-mass brown dwarf formed like other stars and brown dwarfs: a ‘planet mass’ brown dwarf.”

“Regardless, it should spur new research in planet and star formation theories, and serve as a crucial reference point with which to understand the properties of young planets at similar temperatures, masses and ages,” Currie said.

Adapted from a news release issued by University of Toronto