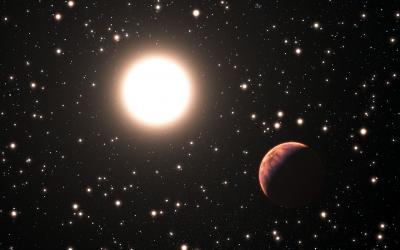 Astronomers have used ESO’s HARPS planet hunter in Chile, along with other telescopes around the world, to discover three planets orbiting stars in the cluster Messier 67.

Although more than one thousand planets outside the Solar System are now confirmed, only a handful have been found in star clusters. Remarkably one of these new exoplanets is orbiting a star that is a rare solar twin — a star that is almost identical to the Sun in all respects.

Planets orbiting stars outside the Solar System are now known to be very common. These exoplanets have been found orbiting stars of widely varied ages and chemical compositions and are scattered across the sky. But, up to now, very few planets have been found inside star clusters [1]. This is particularly odd as it is known that most stars are born in such clusters. Astronomers have wondered if there might be something different about planet formation in star clusters to explain this strange paucity.

Anna Brucalassi (Max Planck Institute for Extraterrestrial Physics, Garching, Germany), lead author of the new study, and her team wanted to find out more. “In the Messier 67 star cluster the stars are all about the same age and composition as the Sun. This makes it a perfect laboratory to study how many planets form in such a crowded environment, and whether they form mostly around more massive or less massive stars.”

The team used the HARPS planet-finding instrument on ESO’s 3.6-metre telescope at the La Silla Observatory. These results were supplemented with observations from several other observatories around the world [2]. They carefully monitored 88 selected stars in Messier 67 [3] over a period of six years to look for the tiny telltale motions of the stars towards and away from Earth that reveal the presence of orbiting planets.

This cluster lies about 2500 light-years away in the constellation of Cancer (The Crab) and contains about 500 stars. Many of the cluster stars are fainter than those normally targeted for exoplanet searches and trying to detect the weak signal from possible planets pushed HARPS to the limit.

Three planets were discovered, two orbiting stars similar to the Sun and one orbiting a more massive and evolved red giant star. The first two planets both have about one third the mass of Jupiter and orbit their host stars in seven and five days respectively. The third planet takes 122 days to orbit its host and is more massive than Jupiter [4].

The first of these planets proved to be orbiting a remarkable star — it is one of the most similar solar twins identified so far and is almost identical to the Sun (eso1337) [5]. It is the first solar twin in a cluster that has been found to have a planet.

Two of the three planets are “hot Jupiters” — planets comparable to Jupiter in size, but much closer to their parent stars and hence much hotter. All three are closer to their host stars than the habitable zone where liquid water could exist.

“These new results show that planets in open star clusters are about as common as they are around isolated stars — but they are not easy to detect,” adds Luca Pasquini (ESO, Garching, Germany), co-author of the new paper [6]. “The new results are in contrast to earlier work that failed to find cluster planets, but agrees with some other more recent observations. We are continuing to observe this cluster to find how stars with and without planets differ in mass and chemical makeup.”

[1] Star clusters come in two main types. Open clusters are groups of stars that have formed together from a single cloud of gas and dust in the recent past. They are mostly found in the spiral arms of a galaxy like the Milky Way. On the other hand globular clusters are much bigger spherical collections of much older stars that orbit around the centre of a galaxy. Despite careful searches, no planets have been found in a globular cluster and less than six in open clusters. Exoplanets have also been found in the past two years in the clusters NGC 6811 and Messier 44, and even more recently one has also been detected in the bright and nearbyHyades cluster.

[2] This work also used observations from the SOPHIE instrument at the Observatoire de Haute-Provence in France, the Swiss 1.2-metre Leonhard Euler Telescope at ESO’s La Silla Observatory in Chile and the Hobby Eberly Telescope in Texas, USA.

[3] Most open clusters dissipate after a few tens of million years. However, clusters that form with a higher density of stars can stay together for much longer. Messier 67 is an example of such a long-lived older cluster and is one of the oldest and best-studied of such clusters close to the Earth.

[4] Mass estimates for planets observed using the radial velocity method are lower estimates: if the planet’s orbit is highly inclined it could have a higher mass and create the same observed effects.

[5] Solar twins, solar analogues and solar-type stars are categories of stars according to their similarity to the Sun. Solar twins are the most similar to the Sun, as they have very similar masses, temperatures, and chemical abundances. Solar twins are very rare, but the other classes, where the similarity is less precise, are much more common.

[6] This detection rate of 3 planets in a sample of 88 stars in Messier 67 is close to the average frequency of planets around stars that are not members of clusters.

This research was presented in a paper entitled “Three planetary companions around M67 stars“, by A. Brucalassi et al., to appear in the journal Astronomy & Astrophysics.

Adapted from a news release issued by ESO