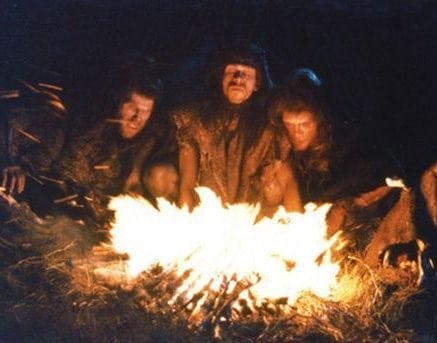 It’s generally reckoned that early man “discovered” fire somewhere around a million years ago, but it’s still unclear when he began to control and use it.

Chiming in, scientists from Israel have found in the so-called Qesem Cave the earliest evidence yet, from roughly 300,000 years ago, of systematic fire building over a sustained period.

The find hints that early humans had a surprisingly advanced social structure and intelligence.

Digs have been underway since 2000 in Qesem Cave, an archaeological site near present-day Rosh Ha’ayin. The Israeil researchers, including Dr. Ruth Shahack-Gross from the Weizmann Institute, have been there from the start.

Shahack-Gross collects samples on-site for later detailed analysis in the lab. Her specialty is ID’ing archeological materials, and she identified a deposit of wood ash in the cave’s center.

With infrared spectroscopy, Shahack-Gross found that bone and soil bits heated to high temperatures were mixed in with the ash. This, they say, is proof the space was the site of a big hearth.

Testing the micro-morphology of the ash was next on the to-do list.Shahack-Gross pulled a cubic chunk of sediment from the site and hardened it in the lab. This she sliced so thin that samples could be placed under a microscope for observation of content and how they were formed.

Doing so, she found numerous micro-strata in the ash, evidence for repeated fires made over time. A report of the findings is in the Journal of Archaeological Sciences.

Archaeologists also found lots flint tools, apparently used for cutting meat, in and around the hearth.

“These findings help us to fix an important turning point in the development of human culture – that in which humans first began to regularly use fire both for cooking meat and as a focal point – a sort of campfire – for social gatherings,” she says. “They also tell us something about the impressive levels of social and cognitive development of humans living some 300,000 years ago.”

Shahack-Gross et al say the cave was divided into different household activities, suggesting an organization of space and a thus kind of social order – that is typical of modern humans. This suggests that the cave was a sort of base camp that prehistoric humans returned to again and again.