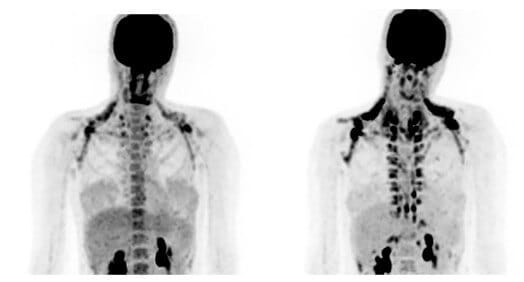 There may be an upside to the cold weather after all. New research suggests that mild cold can help with weight loss. The secret is in the brown fat-brown adipose tissue.

Our bodies have several types of fat. White fat is the kind we accumulate by eating too much and not exercising enough. As reported in a news release from Northwestern University, the body is also composed of brown fat that burns energy rather than stores it.

“Brown fat is distinct from normal white fat in having the ability to increase metabolic heat production at the cellular level,” says William Leonard, a Northwestern University anthropologist, who has studied brown fat.

Until recently, its was thought that brown fat was only important in regulating body temperature in infants, with this capability lost by adulthood. However, imaging studies documented that significant amounts of brown fat exists in adults and that brown fat cells can be generated when people are exposed to the cold.

A new study in the current issue of Trends in Endocrinology & Metabolism explains brown fat research conducted by Anouk van der Lans, a doctoral student in human biology at Maastricht University Medical Center in the Netherlands.

During the study 17 individuals- nine females and eight males- were exposed to mild cold (59-61 degrees) for six hours a day for 10 days. The extended exposure to mildly cold conditions caused a significant increase in energy expenditure and brown fat activity and recruitment.

“In the cold, you can increase heat production in brown fat and this causes an increase energy expenditure of the body” says Wouter van Marken Lichtenbelt, a biologist at Maastricht University Medical Center, who also was involved in the study.

The main purpose of brown fat is to keep us warm. It does so by burning fatty acids from white fat stores in the body. Therefore, it is believed that increased brown fat activity through exposure to the cold can lead to weight loss, when accompanied by a healthy lifestyle, fitness regime and no extra food consumption.

Normally we heat and cool our houses to control ambient temperature and make our environment as comfortable as possible. As a result, we minimize our body energy expenditure. “Creating urban environments where we are almost always in the ‘thermo neutral zone’ may be another factor that has contributed to growing rates of obesity in the US over the last 50 years,” says Leonard.

When we are cold our body has to work to control our body temperature, this leads to energy expenditure. In other words we burn calories to heat and cool our bodies.

Before you go rushing out into the cold there is a catch.

In another study Leonard and researchers from Wayne State University in Detroit, 25 adults- 15 women and 10 men- were exposed to mild cold (60 degrees) for an extended period of time. Acclimation to this mild cold condition caused a 17 percent increase in energy expenditure.

Theories of cold exposure as method for losing weight may be flawed because the approach will not work for everyone.

Many essential questions have yet to be answered. Further research is to be conducted.

“We need to know long-term effects of variable temperatures and mild cold on health,” says Marken Lichtenbelt. “We will also study different age groups and the link between physiology and thermal behavior.”

1 thought on “Get all shivery to lose weight”