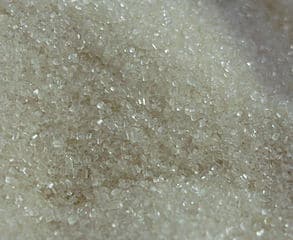 Many U.S. adults consume more added sugar (added in processing or preparing of foods, not naturally occurring as in fruits and fruit juices) than expert panels recommend for a healthy diet, and consumption of added sugar was associated with increased risk for death from cardiovascular disease (CVD), according to a study published by JAMA Internal Medicine, a JAMA Network publication.

Major sources of added sugar in Americans’ diets are sugar-sweetened beverages, grain-based desserts, fruit drinks, dairy desserts and candy. A can of regular soda contains about 35g of sugar (about 140 calories).

Quanhe Yang, Ph.D., of the Centers for Disease Control and Prevention, Atlanta, and colleagues used national health survey data to examine added sugar consumption as a percentage of daily calories and to estimate association between consumption and CVD.

The authors note the risk of death from CVD increased with a higher percentage of calories from added sugar. Regular consumption of sugar-sweetened beverages (seven servings or more per week) was associated with increased risk of dying from CVD.

“Our results support current recommendations to limit the intake of calories from added sugars in U.S. diets,” the authors conclude.

In a related commentary, Laura A. Schmidt, Ph.D., M.S.W., M.P.H., of the University of California, San Francisco, writes: “We are in the midst of a paradigm shift in research on the health effects of sugar, one fueled by extremely high rates of added sugar overconsumption in the American public.”

“In sum, the study by Yang et al contributes a range of new findings to the growing body of research on sugar as an independent risk factor in chronic disease. It underscores the likelihood that, at levels of consumption common among Americans, added sugar is a significant risk factor for CVD mortality above and beyond its role as empty calories leading to weight gain and obesity,” Schmidt continues.