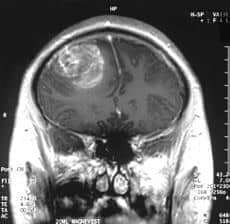 Adults with low-grade gliomas, a form of brain tumor, who received a chemotherapy regimen following completion of radiation therapy, lived longer than patients who received radiation therapy alone, according to long-term follow-up results from a National Institutes of Health-supported randomized controlled clinical trial.

Since all three chemotherapy drugs in the regimen are commercially available, the treatment used in the clinical trial is available for use now. However, this form of chemotherapy is associated with some toxicities, such as reduced white blood cell counts leading to increased infection risk, and trial investigators recommend that it should be utilized only by physicians experienced with managing the side-effects that may occur.

Low-grade gliomas grow more slowly and have a better outcome than the more common type of brain tumor in adults, which is classified as glioblastoma.

The Radiation Therapy Oncology Group (RTOG), a clinical trials organization funded by the National Cancer Institute (NCI), part of NIH, and NCI are making the results public today because a long-term follow-up analysis showed significantly longer survival for those people on the trial who received chemotherapy. Full details from this analysis are to be presented at a scientific meeting in 2014 and in a peer-reviewed publication.

The study, RTOG 9802, enrolled 251 patients with low-grade gliomas between October 1998 and June 2002 to address the role of chemotherapy following radiation treatment. Patients enrolled were at high risk compared to other low-grade glioma patients because they were 40 years of age or older or had a less than complete surgical removal of their tumor if they were under 40 years of age.

“The results of this study are practice-changing,” said co-lead investigator Jan Buckner, M.D., professor of oncology, Mayo Clinic, Rochester, Minn. “Additionally, ongoing analysis of patient tumor samples should allow us to further identify the patients who will, and who will not, benefit from chemotherapy, taking yet another step toward individualized therapy.”

Edward Shaw, M.D., co-lead investigator and radiation oncologist at Wake Forest School of Medicine, Winston-Salem, NC, noted, “Patients who are deemed appropriate candidates for radiation therapy should be encouraged to receive chemotherapy as well, understanding both the potential benefits and risks.”

RTOG 9802 was sponsored by NCI and was designed and conducted by RTOG in collaboration with three other NCI cooperative groups (SWOG, ECOG-ACRIN, and the Alliance for Clinical Trials in Oncology). RTOG will work as a component of a new network group, NRG Oncology, effective March 2014.

“This trial would not have been done in the United States without a large national network of investigators brought together through the NCI-supported Cooperative Group program that was capable of enrolling patients with a relatively uncommon cancer like low-grade glioma,” said Jeff Abrams, M.D., clinical director of NCI’s Division of Cancer Treatment and Diagnosis. “These findings also are an example of how combining available treatments can produce a significant improvement in clinical outcome.”

It is estimated that over 23,000 people will be diagnosed with primary brain tumors in the United States in 2014 and that 10 percent to 15 percent will have low-grade gliomas.

The National Cancer Institute (NCI) leads the National Cancer Program and the NIH effort to dramatically reduce the prevalence of cancer and improve the lives of cancer patients and their families, through research into prevention and cancer biology, the development of new interventions, and the training and mentoring of new researchers. For more information about cancer, please visit the NCI website at http://www.cancer.gov or call NCI’s Cancer Information Service at 1-800-4-CANCER (1-800-422-6237).