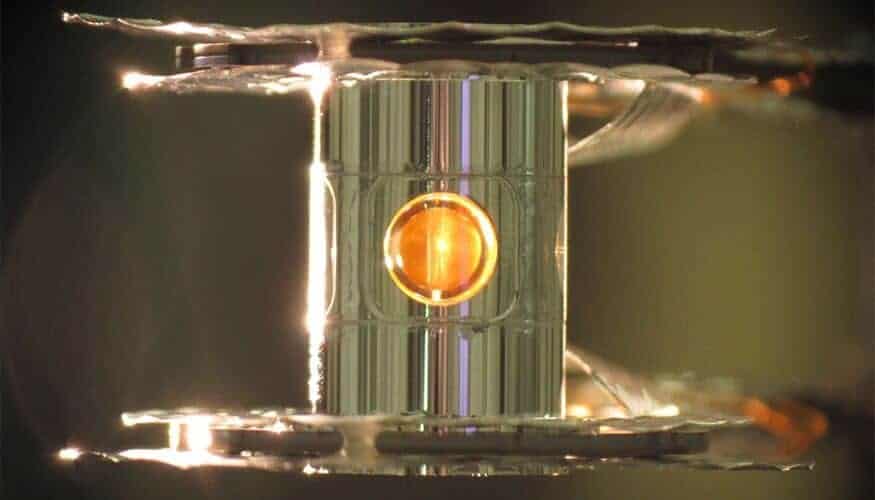 Ignition — the process of releasing fusion energy equal to or greater than the amount of energy used to confine the fuel — has long been considered the “holy grail” of inertial confinement fusion science. A key step along the path to ignition is to have “fuel gains” greater than unity, where the energy generated through fusion reactions exceeds the amount of energy deposited into the fusion fuel.

Though ignition remains the ultimate goal, the milestone of achieving fuel gains greater than 1 has been reached for the first time ever on any facility. In a paper published in the Feb. 12 online issue of the journal Nature, scientists at Lawrence Livermore National Laboratory (LLNL) detail a series of experiments on the National Ignition Facility(NIF), which show an order of magnitude improvement in yield performance over past experiments.

“What’s really exciting is that we are seeing a steadily increasing contribution to the yield coming from the boot-strapping process we call alpha-particle self-heating as we push the implosion a little harder each time,” said lead author Omar Hurricane.

Boot-strapping results when alpha particles, helium nuclei produced in the deuterium-tritium (DT) fusion process, deposit their energy in the DT fuel, rather than escaping. The alpha particles further heat the fuel, increasing the rate of fusion reactions, thus producing more alpha particles. This feedback process is the mechanism that leads to ignition. As reported in Nature, the boot-strapping process has been demonstrated in a series of experiments in which the fusion yield has been systematically increased by more than a factor of 10 over previous approaches.

The experimental series was carefully designed to avoid breakup of the plastic shell that surrounds and confines the DT fuel as it is compressed. It was hypothesized that the breakup was the source of degraded fusion yields observed in previous experiments. By modifying the laser pulse used to compress the fuel, the instability that causes break-up was suppressed. The higher yields that were obtained affirmed the hypothesis, and demonstrated the onset of boot-strapping.

The experimental results have matched computer simulations much better than previous experiments, providing an important benchmark for the models used to predict the behavior of matter under conditions similar to those generated during a nuclear explosion, a primary goal for the NIF.

The chief mission of NIF is to provide experimental insight and data for the National Nuclear Security Administration’s science-based Stockpile Stewardship Program. This experiment represents an important milestone in the continuing demonstration that the stockpile can be kept safe, secure and reliable without a return to nuclear testing. Ignition physics and performance also play a key role in fundamental science, and for potential energy applications.

“There is more work to do and physics problems that need to be addressed before we get to the end,” said Hurricane, “but our team is working to address all the challenges, and that’s what a scientific team thrives on.”