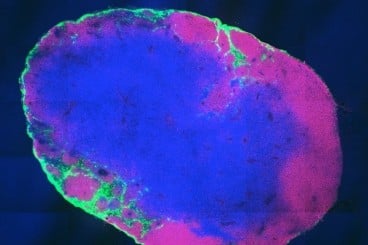 Many vaccines, including those for influenza, polio, and measles, consist of a killed or disabled version of a virus. However, for certain diseases, this type of vaccine is ineffective, or just too risky.

An alternative, safer approach is a vaccine made of small fragments of proteins produced by a disease-causing virus or bacterium. This has worked for some diseases, but in many cases these vaccines don’t provoke a strong enough response.

Now a team of engineers at MIT has developed a new way to deliver such vaccines directly to the lymph nodes, where huge populations of immune cells reside: These vaccines hitch a ride to the lymph nodes by latching on to the protein albumin, found in the bloodstream. In tests with mice, such vaccines produced very strong immune responses, the researchers report in the Feb. 16 online edition of Nature.

“The lymph nodes are where all the action happens in a primary immune response. T cells and B cells reside there, and that’s where you need to get the vaccine to get an immune response. The more material you can get there, the better,” says Darrell Irvine, a professor of biological engineering and of materials science and engineering, and the senior author of the paper.

This approach could be especially useful for delivering HIV vaccines and for stimulating the body’s immune system to attack tumors, says Irvine, who is also a member of MIT’s Koch Institute for Integrative Cancer Research.

Vaccines made of protein or sugar fragments, also known as subunit vaccines, have been successful against a few diseases, such as hepatitis and diphtheria. To develop subunit vaccines for other diseases, scientists have tried targeting them to lymph nodes using nanoparticles to deliver them, or tagging them with antibodies specific to immune cells in the lymph nodes.

However, these strategies have had only limited success, because it is difficult to get all of the vaccine to the lymph nodes without some escaping to the rest of the body, which can cause unwanted side effects.

Irvine’s team took a new approach, based on an existing procedure for targeting imaging dyes to the lymph nodes. Surgeons use this procedure, known as “sentinel lymph node mapping,” to determine the extent of cancer metastasis after removing a tumor. The dye used for this imaging binds tightly to albumin, allowing it to accumulate in the lymph nodes.

Previous studies have revealed that when foreign particles such as the dye bind to albumin, immune cells in the lymph nodes efficiently capture the albumin. “We realized that might be an approach that you could try to copy in a vaccine — design a vaccine molecule that binds to albumin and hitchhikes to the lymph node,” Irvine says.

To get protein fragments, known as peptides, to bind to albumin, the researchers took advantage of albumin’s function as a transporter of molecules called fatty acids. Albumin has binding pockets that can capture fatty, hydrophobic molecules, so the researchers added a fatty tail called a lipid to their vaccine peptides.

They created a few different vaccines, targeting HIV, melanoma, and cervical cancer, and tested them in mice. Each one generated a large population of memory T cells specific to the viral or tumor peptide.

“We knew we were on the right track because we saw you could get immune responses that were just tremendous,” Irvine says. “When you look in the blood, one in three T cells in the blood was a vaccine-specific T cell, which is something you usually only see with vaccines delivered by viruses.”

“It certainly is an interesting approach, and the results are very convincing,” says Pal Johansen, a professor of dermatology at University Hospital Zurich who was not part of the research team. “Both the effect on the stimulated immune responses and the consequential suppression of tumor growth are results that would suggest further development and clinical testing.”

The researchers also tested this delivery strategy with an adjuvant — a molecule that enhances the immune responses of vaccines. Targeting a commonly used adjuvant called CpG to albumin dramatically boosted the resulting inflammatory response. This delivery method could also improve the safety of adjuvants, by confining their effects to the lymph nodes. Otherwise, the adjuvant could spread through the bloodstream and provoke inflammation in other parts of the body.

“This lymph-node-targeting modification causes pretty much all of the material to get caught in the draining lymph nodes, so that means it’s more potent because it’s getting concentrated in the lymph nodes, and it also makes it more safe because it’s not getting into the systemic circulation,” Irvine says.

The researchers are planning to test this method to deliver HIV vaccines in nonhuman primates, and they are also working on further developing cancer vaccines, including one for lung cancer.

The research was funded by the Koch Institute Support Grant from the National Cancer Institute, the National Institutes of Health, the U.S. Department of Defense, and the Ragon Institute of Massachusetts General Hospital, MIT, and Harvard University.