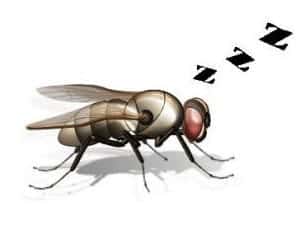 Pulling an “all-nighter” before a big test is practically a rite of passage in college. Usually, it’s no problem: You stay up all night, take the test, and then crash, rapidly catching up on lost sleep. But as we age, sleep patterns change, and our ability to recoup lost sleep diminishes.

Researchers at the Perelman School of Medicine, University of Pennsylvania, have been studying the molecular mechanisms underpinning sleep. Now they report that the pathways of aging and sleep intersect at the circuitry of a cellular stress response pathway, and that by tinkering with those connections, it may be possible to alter sleep patterns in the aged for the better – at least in fruit flies.

Nirinjini Naidoo, PhD, associate professor in the Center for Sleep and Circadian Neurobiology and the Division of Sleep Medicine, led the study with postdoctoral fellow Marishka Brown, PhD, which waspublished online before print in the journal Neurobiology of Aging.

Increasing age is well known to disrupt sleep patterns in all sorts of ways. Elderly people sleep at night less than their younger counterparts and also sleep less well. Older individuals also tend to nap more during the day. Naidoo’s lab previously reported that aging is associated with increasing levels of protein unfolding, a hallmark of cellular stress called the “unfolded protein response.”

Protein misfolding is also a characteristic of several age-related neurodegenerative diseases, such as Alzheimer’s and Parkinson’s diseases, and as it turns out, also associated with sleep deprivation. Naidoo and her team wanted to know if rescuing proper protein folding behavior might counter some of the detrimental sleep patterns in elderly individuals.

Using a video monitoring system to compare the sleep habits of “young” (9–12 days old) and “aged” (8 weeks old) fruit flies, they found that aged flies took longer to recover from sleep deprivation, slept less overall, and had their sleep more frequently interrupted compared to younger control animals. However, adding a molecule that promotes proper protein folding – a molecular “chaperone” called PBA — mitigated many of those effects, effectively giving the flies a more youthful sleep pattern. PBA (sodium 4-phenylbutyrate) is a compound currently used to treat such protein-misfolding-based diseases as Parkinson’s and cystic fibrosis.

The team also asked the converse question: Can protein misfolding induce altered sleep patterns in young animals. Another drug, tunicamycin, induces protein misfolding and stress, and when the team fed it to young flies, their sleep patterns shifted towards those of aged flies, with less sleep overall, more interrupted sleep at night, and longer recovery from sleep deprivation.

Molecular analysis of sleep-deprived and PBA-treated flies suggested that PBA acts through the unfolded protein response. PBA, Naidoo says, had two effects on aged flies: it “consolidated” baseline sleep, increasing the total amount of time slept and shifted recovery sleep, after sleep deprivation, to look more like that of a young fly.

“It rescued the sleep patterns in the older flies,” she explains.

These results, Naidoo says, suggest three key messages. First, sleep loss leads to protein misfolding and cellular stress, and as we age, our ability to recover from that stress decreases. Second, aging and sleep apparently form a kind of negative “chicken-and-egg” feedback loop, in which sleep loss or sleep fragmentation lead to cellular stress, followed by neuronal dysfunction, and finally even poorer-quality sleep.

Sleep recharges neuronal batteries, Naidoo explains, and if a person is forced to stay awake, those batteries run down. Dwindling physiological resources must be devoted to the most critical cell functions, which do not necessarily include protein homeostasis. “Staying awake has a cost, and one of those costs is problems with protein folding.”

Finally, and most importantly, she says these results suggest — assuming they can be replicated in mice and humans – that it may be possible using drugs such as PBA to “fix sleep” in aged or mutant animals.

“People know that sleep deteriorates with aging,” Naidoo says, “But this might be able to be stopped or reversed with molecular chaperones.” Her team is now looking to determine if a similar situation exists in mammals and if better sleep translates into longer lifespan.