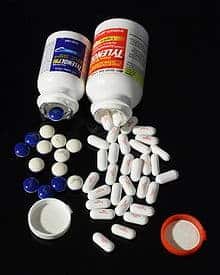 Acetaminophen, found in over-the-counter products such as Excedrin and Tylenol, provides many people with relief from headaches and sore muscles. When used appropriately, it is considered mostly harmless. Over recent decades, the drug, which has been marketed since the 1950s, has become the medication most commonly used by pregnant women for fevers and pain.

Now, a long-term study by UCLA, in collaboration with the University of Aarhus in Denmark, has raised concerns about the use of acetaminophen during pregnancy.

In a report in the current online edition of JAMA Pediatrics, researchers from the UCLA Fielding School of Public Health show that taking acetaminophen during pregnancy is associated with a higher risk in children of attention-deficity/hyperactivity disorder and hyperkinetic disorder. The data raises the question of whether the drug should be considered safe for use by pregnant women.

ADHD, one of the most common neurobehavioral disorders worldwide, is characterized by inattention, hyperactivity, increased impulsivity, and motivational and emotional dysregulation. Hyperkinetic disorder is a particularly severe form of ADHD.

“The causes of ADHD and hyperkinetic disorder are not well understood, but both environmental and genetic factors clearly contribute,” said Dr. Beate Ritz, professor and chair of the department of epidemiology at the Fielding School and one of the senior authors of the paper. “We know there has been a rapid increase in childhood neurodevelopmental disorders, including ADHD, over the past decades, and it’s likely that the rise is not solely attributable to better diagnoses or parental awareness. It’s likely there are environmental components as well.”

“That gave us the motivation to search for environmental causes that are avoidable,” said the University of Aarhus’ Dr. Jørn Olsen, another senior author and former chair of the UCLA Fielding School’s epidemiology department. “Part of the neuropathology may already be present at birth, making exposures during pregnancy and/or infancy of particular interest. Because acetaminophen is the most commonly used medication for pain and fever during pregnancy, it was something we thought we should look at.”

The UCLA researchers used the Danish National Birth Cohort, a nationwide study of pregnancies and children, to examine pregnancy complications and diseases in offspring as a function of factors operating in early life. The cohort focuses especially on the side effects of medications and infections.

The researchers studied 64,322 children and mothers who were enrolled in the Danish cohort from 1996 to 2002. Acetaminophen use during pregnancy was determined using computer-assisted telephone interviews that were conducted up to three times during pregnancy and again six months after childbirth.

The researchers next followed up with parents when their children reached the age of 7. They first asked parents about any behavioral problems in their children using the Strength and Difficulties Questionnaire, a standard behavioral screening questionnaire used by scientists. It assesses five domains, including emotional symptoms, conduct problems, hyperactivity, peer relationship and social behavior in children and adolescents between the ages of 4 and 16.

In addition, they obtained diagnoses of hyperkinetic disorder among the cohort’s children (at an average age of 11) from the Danish National Hospital Registry or the Danish Psychiatric Central Registry. Last, they identified if ADHD medications, mainly Ritalin, were redeemed for the children using the Danish pharmaceutical prescription database.

More than half of all the mothers reported using acetaminophen while pregnant. The researchers found that children whose mothers used acetaminophen during pregnancy were at a 13 percent to 37 percent higher risk of later receiving a hospital diagnosis of hyperkinetic disorder, being treated with ADHD medications or having ADHD-like behaviors at age 7. The longer acetaminophen was taken — that is, into the second and third trimesters — the stronger the associations. The risks for hyperkinetic disorder/ADHD in children were elevated 50 percent or more when the mothers had used the common painkiller for more than 20 weeks in pregnancy.

Acetaminophen can cross the placental barrier, Ritz noted, and it is plausible that acetaminophen may interrupt fetal brain development by interfering with maternal hormones or through neurotoxicity, such as the induction of oxidative stress, which can cause the death of neurons.

“We need further research to verify these findings, but if these results reflect causal associations, then acetaminophen should no longer be considered a ‘safe’ drug for use in pregnancy,” Olsen said.

Other authors of the study included Zeyan Liew (first author) and Pei-Chen Lee of UCLA, and Cristina Rebordosa of the University of Arizona. Funding was provided by the Danish Medical Research Council (09-069178).