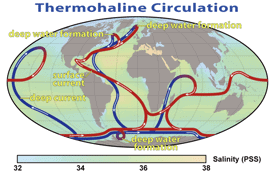 An international team of scientists has discovered that the circulation pattern of deep water in the North Atlantic may be more fragile than previously thought due to a rapid addition of fresh water to the ocean’s surface waters. Their paper has been published in the online edition of the journal Science.

Scientists believe changes in this circulation – called thermohaline circulation – may dramatically accelerate global climate change. “The formation of deep water exerts a large influence on the temperature difference between the Arctic and the equator,” says Yair Rosenthal, professor of marine science in Rutgers’ School of Environmental and Biological Sciences and a co-author of the paper. “It also influences atmospheric circulation and affects the major climate systems of the far northern hemisphere.  In the past, such changes have been implicated in changing precipitation patterns near the equator, and that can mean longer, more severe droughts in places like Africa’s Sahel.”

Rosenthal and his co-authors say such changes could affect carbon sequestration – the process by which carbon dioxide is taken out of the atmosphere and stored in the deep ocean. Carbon dioxide is more soluble in cold water than in warm water, so the warmer the water becomes, the less efficient sequestration becomes. Finally, regional sea level may rise because of the extra water from increased precipitation, the reduction of polar icecaps and the melting of glaciers in the high latitudes.

The researchers found no evidence of a massive cooling leading quickly to the next ice age, however, as was depicted in the movie The Day After Tomorrow.

“Our study shows that deep water formation can be disrupted by the freshening of regional surface water, which might happen under increased precipitation and the melting of glaciers and reduction of polar icecaps,” Rosenthal says.

Rosenthal explains that surface water in the far North Atlantic becomes colder and denser in the winter time, sinks to the bottom, and circulates all through the North and South Atlantic, finds its way to the Southern Ocean, and then the Indian and Pacific oceans. Eventually the water that sank to the bottom of the North Atlantic rises toward the surface in other parts of the world, still relatively cold and rich in nutrients.

Scientists had thought thermohaline circulation was stable during periods between ice ages, but Rosenthal and his co-authors suggest that was not the case 125,000 years ago, during the last interglacial period.

“At that time, there was a series of sudden, large reductions in the influence of these North Atlantic waters in the deep ocean,” Galaasen, said. “These deep water reductions occurred repeatedly, each lasting for some centuries before bouncing back.”

The researchers used the shells of tiny single-celled, bottom-dwelling animals called foraminifera, found in marine sediment in the northern North Atlantic Ocean, to reconstruct the surface ocean conditions and deep ocean circulation of 125,000 thousand years ago. The North Atlantic was warmer and fresher and the sea level higher than it is today.

“While the climate of the last interglacial period is not exactly what we will face in the future, it does share some features, including being fresher and warmer in the North Atlantic,” Rosenthal said. “And if models can capture the kind of changes we see in the past, they may also do a good job of predicting our future.”